10 Insights from the Action Assembly Weekend

“Either I pay taxes or have my mother live with me,” said Neil Brooks with a sly smile. Brooks, co-author of The Trouble With Billionaires (with Linda McQuaig) underlined the value of taxes during the keynote address at this year’s Ontario Health Coalition (OHC) Action Assembly Weekend.

Brooks said that as we shift the line between what’s public and what’s private, the cost to individuals rises as government services become far more expensive to replace privately.

The Action Assembly is the OHC’s annual meeting to plan priorities for the coming year as well as review the victories of the previous one.

November 17-18 the meeting hall at the University of Toronto’s Hart House was packed as health care activists travelled from across the province to meet.

Here are 10 insight moments from this year’s 2-day meeting:

1. Switzerland is a criminal state. Neil Brooks, a tax law professor at Osgoode Law School, said governments have begun to recognize how much money they are losing to tax havens that protect the wealthy from paying their fair share back in their country of residence. It is estimated that $20-$30 trillion is salted away in tax havens, resulting in the loss of billions of dollars to public treasuries. Brooks says more money is leaving Africa for tax havens than all foreign aid coming to the continent.

2. Actor Michael Caine says increasing taxes on the wealthy amounts to government interference. But Brooks suggests that Caine is overlooking the copyright laws passed by the same government that secure his wealth. When it benefits the wealthy, it’s not interference or big government. As top marginal tax rates dramatically decreased in the last 30 years, so did the spread between income growth between the wealthy and the rest of us. Brooks says that with the massive number of films Caine has made, the odds would suggest some of them had to be good.

3. The government should begin health care reform by eliminating regulations that protect private profit in health care. Ross Sutherland, Community Co-Chair of the OHC, said allowing hospital labs to do community-based lab work would reduce costs by using excess capacity in the system. Presently hospitals are prohibited from doing so. Stripping away restrictions on the Community Care Access Centres from hiring and providing direct care would also strip away layers of bureaucracy in home care. Sutherland says profit skews the debate in how health care resources are distributed and prevents real integration. There would be far less opposition to moving services out of the hospital and into the community if these services were delivered publicly and protected under the Canada Health Act. 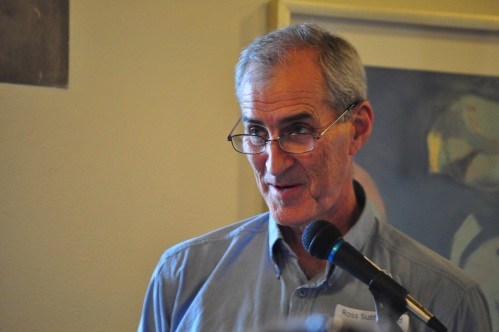 4. “I feel like a cop.” Economist Hugh MacKenzie talks about the pleasure he gets from doing research work that exposes bad policy initiatives. Having won this year’s OHC Ethel Meade Award for research, MacKenzie took particular aim at influential former banker Don Drummond. MacKenzie says Drummond’s report earlier this year was the “epitomy of hysteria inducement,” much of it focused on wildly improbable economic assumptions. MacKenzie says the assumptions fail the reality test. “Don Drummond is evidence that you should have a license to do compound arithmetic,” he said.

5. Politics is often best reflected in art. Author Gary Engler donated half the proceeds from the weekend sales of his new novel to the Ontario Health Coalition. Engler’s book, The Year We Became Us, is a fictional account set during the 1962 Saskatchewan doctors strike and the birth of Medicare in Canada. The novel is told through a series of letters between the son of a union activist and the daughter of a surgeon. Engler is a former reporter with the Vancouver Sun and author of the play Sudden Death Overtime. 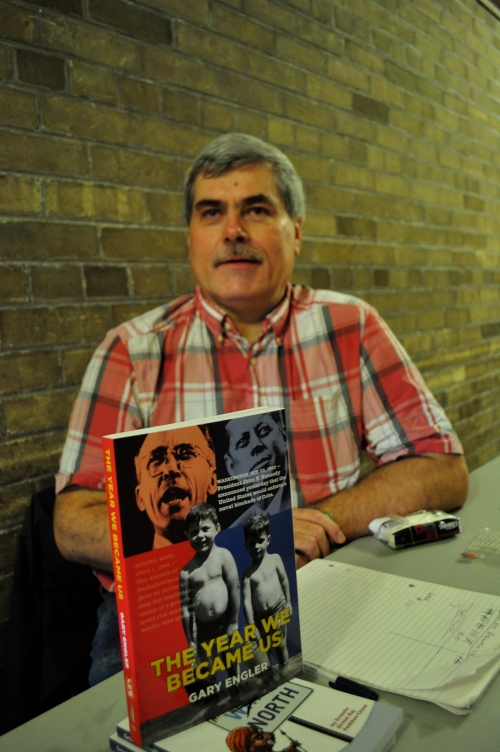 6. Is there a union activist in the room? Niagara’s Sue Hotte is known for her exuberant sales pitch for various fundraising items from the Ontario Health Coalition. However, when she climbed on a chair so the audience could get a better view of the OHC t-shirt she was modeling, half the audience gasped in unison “Health and Safety!” We train them well.

7. Both Dr. Michael Rachlis and Neil Brooks had a pitch of their own – for the book The Spirit Level by Richard Wilkinson and Kate Pickett. Both used similar charts from the book showing growing inequality makes worse a wide range of social and economic conditions. Rachlis quoted Bob Rae’s view that Canadians want American-style taxes and European-style social programs. Rachlis says we did get one of the two – American-style taxes. Canada and the United States now spend the same percentage of their overall economy on public services. Rachlis showed a map of Toronto where higher diabetes rates coincide with low-income neighborhoods.

8. Can you support health care reform and at the same time defend a strong publicly delivered health care system? Dr. Rachlis says yes. There is substantial waste in the system we cannot ignore. Our focus should be on both modernizing the system and finishing Tommy Douglas’ original vision for Medicare, he says. That includes expanding the scope of coverage and working on preventative initiatives often considered the second stage of Medicare. He asks how can we possibly support a system where doctors are receiving an increase of $100,000 in net salary for simply joining a family health team? He also gave an example of referrals to spine surgeons. Only 10 per cent of referrals actually lead to surgery, making most referrals a waste of time and money. Rachlis offered up examples of group practices that have been successful in reducing waits and dramatically increasing access to patient care, particularly in mental health.

OPSEU’s Marlene Rivier was among eight winners of the Dan Benedict award for activisim.

9. They served: The OHC recognized three key activists that have passed away within the last year. A short video highlighted the life of Patty Park who recently served as co-Chair of the Northumberland Hills Health Coalition. Park was posthumously awarded a Dan Benedict Award for activism. Moving tributes were also made of Gary Countess from the Leamington Health Coalition, and Ethel Meade, who was one of the founding members of the Ontario Health Coalition (along with Dr. Michael Rachlis). Awards were also given out to the living, including OPSEU’s Marlene Rivier. who received the OHC’s Dan Benedict Award. When Rivier isn’t serving as president of her OPSEU local at the Royal Ottawa Hospital, she is Chair of the Ottawa Health Coalition and sometimes candidate for the Federal NDP. Other winners include Ron Walker, Louis Rodriguez, Trish McAuliffe, Donna Metcalf-Woo, Sara Williamson, and Orville Thacker. The awards are a reminder of the deep commitment that exists within the community. 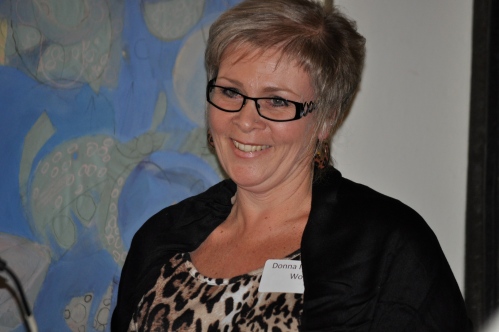 Donna Metcalf Woo, one of eight winners of the Dan Benedict Award.

10. One of the assumptions by government is that future community-based services will be paid for by reductions in hospital activity. The problem with this thinking is that hospitals are already overcapacity and working at unheard-of occupancy levels. OHC Director Natalie Mehra pointed out that no other country has their hospitals operating at a 98 per cent average occupancy. Overcrowding contributes to the spread of hospital-borne infections, the cancellation of surgeries, and the back up and long waits in ER. She says governments manufactured the ALC – alternative level of care – issue to justify the offloading of patients. “Nobody has cut hospital beds like Ontario,” she said. Mehra questioned the plan to making hospitals solely acute care centres. In recent years many hospitals have abandoned outpatient rehab services, leaving many in the community to seek rehab at their own expense – when they can find it.

2 responses to “10 Insights from the Action Assembly Weekend”