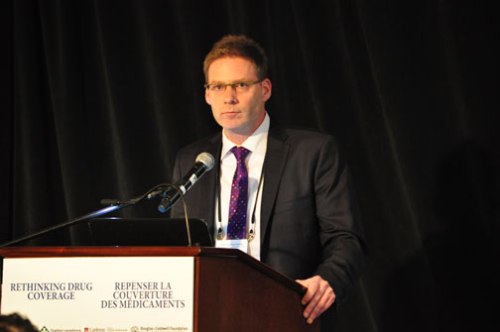 Jeff Connell (Canadian Generic Pharmaceutical Association) says Ontario spend $24 million more than they needed to by delaying adoption of the generic version of just one drug — Crestor — into the provincial formulary.

OTTAWA – Experts came from as far away as France, the United Kingdom and even New Zealand. Politicians from both the NDP and Liberals were there, as well as academics and policy-makers from across Canada. But Leona Aglukkaq, Canada’s Federal Minister of Health, couldn’t travel the few blocks from Parliament Hill to Ottawa’s National Hotel to participate in a national forum on pharmaceutical policy.

She might have been excused had her schedule not allowed her to come, but her letter to organizer Michael McBane stated “the subject matter of this conference has to do with health care delivery, which is a provincial and territorial responsibility.”

The question is, why is Aglukkaq so blatantly misrepresenting the Federal government’s responsibilities around both health care and pharmaceutical policy?

As we pointed out yesterday, the Federal government is the fifth largest direct provider of health care in Canada. They have a constitutional responsibility for health care to both First Nations and Inuit communities. They also have a responsibility to provide health care to specific groups within society, including veterans, refugees claimants, federal inmates, the Canadian Forces and the RCMP.

Forgetting even all of this, the Federal government also has a very specific role around pharmaceuticals, including approval and labeling of new prescription drugs as well as patent rights. They also regulate prices.

There is a sign here on Wellington Street that tells visitors the distance to both war and civilization, a reference to the two major museums. War is closer. Had the conference been about the war on drugs, rather than how to make civilization with a national Pharmacare program, the Feds might have actually been here. While the Federal Minister shows no interest in the savings that could be reaped from a national drug plan, the Federal government has been active in sending support to Mexico to fight the war on drugs.

This is not the first major conference on Pharmacare Aglukkaq has absented herself from. Representatives from industry, patient groups, labour, and even the Conservative-friendly National Citizen’s Coalition were in Vancouver earlier this year to discuss how we could better coordinate a national strategy to provide universal coverage to Canadians for prescription drugs.

Guess she had something else to do that week too.

For a government that claims to be cash-strapped and is cutting jobs in the Federal sector, you would have thought Aglukkaq would have found, for example, Jeff Connell’s presentation of interest. Connell represents the Canadian Generic Pharmaceutical Association. Connell argues that we have 14 different drug formularies in Canada, each with their own process of approval. While BC is considered the gold standard for rapid adoption of appropriate generic drugs on to their formulary after approval by Health Canada, many other provinces are slow to do so, costing taxpayers millions in higher costs. He presented the example of Crestor, a statin used to manage cholesterol. When Crestor was approved as a generic, BC adopted it into their provincial formulary about two weeks later. Ontario took 57 days to do so, costing that province $24 million more to use the higher cost brand name version. In all, the nine provinces spent $44 million more than they needed to through delays in the process to adopt the generic into their provincial formularies.

To put that in perspective, The Scarborough Hospital is presently cutting needed health services to get rid of a $16 million operating deficit. Yet the province’s slow approval process cost $24 million in what another presenter had referred to as “lost opportunity.”

She might have also heard from New Zealand’s Matthew Brougham who described how his country has achieved the lowest drug costs on the planet through a universal capped Pharmacare program. That includes paying much lower prices than Canada for prescription drugs from Apotex – a Canadian company.

While admitting New Zealand’s system had some drawbacks, including slow adoption of expensive new drugs, Brougham said New Zealand would rather adopt a system that would give everyone a “Ford” as opposed to some a “Rolls Royce System,” others a “Ford,” and some with no access to prescription drugs.

Walter Robinson, a former Conservative candidate representing the brand name pharmaceutical companies, made the astute remark “if you are not at the table, somebody is having you for dinner.”

Aglukkaq was definitely had for dinner.

Kathleen Connors, the former Chair of the Canadian Health Coalition, rose to the microphone and expressed her anger at the willful absence of the Federal Health Minister.

Noting Canada’s outlier position as being one of the last industrialized countries to adopt a national drug plan, Connors asked “how do we get the Feds to the table when we are so far behind our brothers and sisters in the developed world?”

Aglukkaq may also take note the excessively high health care costs paid by the U.S. and the similar inefficient U.S. style pharmaceutical system we have in Canada. When it comes to prescription drugs, Canada has some public coverage, some private coverage, and many citizens with no coverage. It is estimated that about one in ten Canadians do not follow their doctor’s prescription because of cost.

Dr. Joel Lexchin, a professor in York University’s School of Health Policy and Management, noted the current Federal government is missing in action and is likely to remain in action until they are thrown out.

Like this story? Please use our share button to pass it on to others who may be interested. Want to do something about it? Check out our activists’ calendar in the right-hand column.