Canada could have universal drug coverage without raising taxes – Morgan 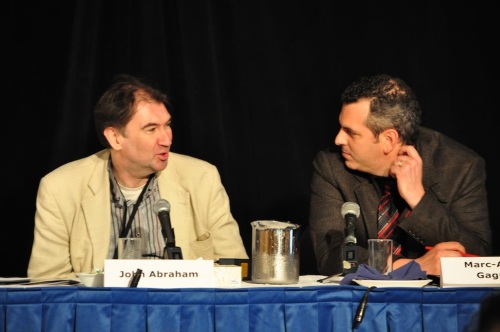 The UK’s John Abraham on a panel with Carleton University’s Marc Andre Gagnon.

10 things we learned from last week’s Ottawa conference on drug coverage hosted by the Canadian Health Coalition and Carleton University:

1. The University of British Columbia’s Steven Morgan noted that if Canada were to adopt the UK’s public drug plan without any changes, it would “be enough to pay for universal Pharmacare in Canada at current rates. We would not have to increase taxes.” Carleton University’s Marc Andre Gagnon says Canada could save $10.7 billion on pharmaceutical costs with a universal drug plan. The question is not can we afford universal drug coverage, but can we afford not to?

2. We’ve reported in several posts on how Canada and the U.S. are outliers when it comes to a universal drug plan for our citizens. This has been the case for a very long time. The international panel noted many countries adopted universal access to prescriptions shortly after World War II. France adopted its social insurance system in 1945 while Britain was a few years behind in starting the National Health System in 1948, quickly adding prescriptions to it in 1952. More recent Scotland, Wales and Northern Ireland abolished all prescription charges, whereas England charges about 5 per cent co-pay on the cost of drugs in its Pharmacare program.

3. New Zealand has among the lowest drug costs in the world. They do this by placing a cap on total drug spending and making pharmaceutical companies bid on a share of that pie. The drawback is it does tend to slow the speed in which expensive new drugs become available, but does succeed in providing universal access to needed medications. There is a small co-pay of about $5 per prescription. There is no co-pay after 20 prescriptions are filled annually. There is practically no private coverage for pharmaceuticals in New Zealand. According to Matthew Brougham, former CEO of PHARMAC, New Zealand has been able to limit the increase in drug pricing over the last decade to 3 per cent per year compared to 9-10 per cent increases worldwide. While Canadian politicians claim they cannot afford to introduce Pharmacare, New Zealand adopted such a system precisely because the country was in dire economic circumstances.

4. The lack of universal drug coverage in Canada has not been for want of evidence or trying. Dr. Joel Lexchin of York University noted in his opening remarks that the Hall Commission recommended it in 1964, the National Health Forum did so in 1997, and it is now policy for both the federal Liberals and NDP. Lexchin says Canada’s Pharmaceutical policy resembles the U.S. health care system – some private coverage, some public, and a lot of people who have nothing. “This is not a pie in the sky scheme,” he said, noting Saskatchewan formerly had universal drug coverage.

5. Remarkably Britain had an open formulary for prescription drugs during the first 20 years of the NHS. The tipping point to rethink limits to the public formulary came with the introduction of Viagara. The NHS was at one time paying for 20,000 Viagara pills per day. Now Britain is working towards a system where drug prices paid to private companies are set according to their therapeutic value. France has a scheme where drug costs are reimbursed to the individual based on a similar scheme. In France, drugs that are weak in therapeutic value are reimbursed at 15 per cent of cost, moderately effective drugs at 35 per cent, and highly effective drugs at 65 per cent. Often the difference between the public subsidy and the actual cost is made up from premium-based “complementary” insurance.

6. Who’s to blame for keeping Canada from adopting universal drug coverage? The blame varied, from private insurance companies to drug plan stakeholders to pharmaceutical companies. Walter Robinson, representing the brand name pharmaceutical companies, posted a Powerpoint slide stating the Rx&D position: “cost of medicine relative to income should not deter access, or adherence to life-saving, life-improving or life-sustaining therapies.” That, at least, sounds like partial support for some form of Pharmacare program, although not necessarily a universal one.

7. One conference attendee scolded the drug companies for the small amount of spending on research relative to marketing. While Robinson tried to justify the costs incurred by brand name pharmaceuticals on marketing, Jeff Connell from the Canadian Generic Pharmaceutical Association generated applause when he bluntly said “if you found a cure for cancer you wouldn’t have to advertise it.” Many new brand name drugs have marginal to no advantage over existing medications.

8. The value of Quebec’s Pharmacare system came under intense debate. Law professor Marie-Claude Premont said it was not a “universal plan” but a “general plan” where on average, the bad risk went to the public plan and the good risk went to the private plan. A mix of private and public plans, insurance is mandatory for all Quebecers, and as such, the entire province has had coverage since 1997. Premont notes that such a mixed system does nothing to control costs – Quebec pays higher drug costs than other provinces. The system is also built on the private insurance model with annual premiums and deductibles, some of them extraordinarily high for part-time workers who are forced by law to buy the plan available in their workplace. Given the mixed private and public system, it means the plans are also inconsistent. Because the private and public plans operate separately, there is no cross-subsidization between the more high risk public plans and the lower risk private plans.

9. Barbara Martinez of Great West Life noted that most private drug plans are not really insurance. Insurance implies low claims and high costs, whereas most drug plans were predictable and claims were widespread. The average cost per private plan member has increased from $1140 in 2006 to $1464 in 2010 (not including the cost of administration or profit). The average person claims 24 prescriptions over the course of a year. “Really your employer is just paying your drug costs,” she said. It is the catastrophic cases that are truly insurable, she told the conference. The rise of biologic and specialty drugs is where the insurance challenges are coming from.

10. How likely are you to have a private workplace drug plan? According to Julie White of the Congress of Union Retirees of Canada, if you are part-time, non-union, a woman, or in the private sector your chances of having one are less. Coverage rates also vary by province.

Like this story? Please use our share button to pass it on to others who may be interested. Want to do something about it? Check out our activists’ calendar in the right-hand column.