Thanksgiving: Here’s to our allies working for the public interest 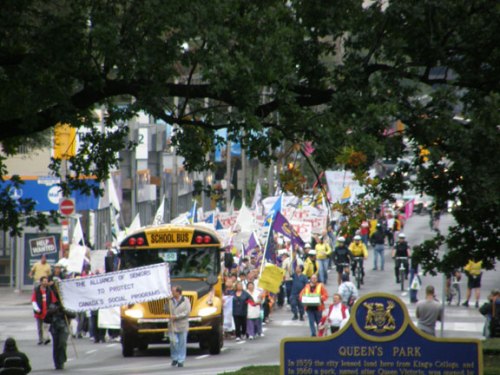 Marching on Queen’s Park in 2008. OPSEU remains proud to be one of the founding organizations behind the Ontario Health Coalition. This weekend we give thanks to our allies who have kept the public interest at the center of the health care reform debate.

“For years, people had been accusing schools run by private equity of pocketing the state’s money and putting it into their offshore bank accounts,” said one education stakeholder, “but now it looked like these companies weren’t even capable of running a business properly.”

There is no question that there is an ideological conflict going on over the future of health care delivery in Canada.

Public and private spending on health care across the country is about $200 billion. That’s a very attractive target for those who recognize that even shifting a small share of that pie from the public to private sphere can result in very handsome profits.

If privatization is a zombie idea that keeps returning to life, it’s because there are big dollars and organizations behind it. That includes press release mills like the Fraser Institute that have significant financial support from American right-wing foundations.

What’s remarkable is the success of a multitude of small community-based organizations on this issue.

OPSEU is among the founding organizations behind the Ontario Health Coalition (OHC), which with a relatively tiny budget has established deep tentacles in communities across the province. It is an umbrella by which many of these organizations interact.

There are shades of John Steinbeck’s fictional Tom Joad behind the OHC. Whenever a hospital is cutting needed services, the OHC is there. Whenever patients are discharged without the home care they need, the OHC is thrilled to be there to give them a voice. In cities and towns across Ontario the OHC holds plebiscite campaigns asking citizens to reject privatization of hospital infrastructure, including last year’s high-profile campaign in Kingston. Those plebiscites have pushed back the scope of these privatizations and resulted in much greater transparency around the deals.

Last spring when the government announced it was going to hold competitions for select hospital services, the OHC gathered thousands of postcards from Ontarians who rejected the idea of moving services from accountable public hospitals to privately run clinics, many of which charge administrative fees, needlessly up sell services and lack critical transparency, especially around infection control. This fall that campaign continues with a march on Queen’s Park November 21.

Similarly the Canadian Health Coalition has been active in promoting the idea of public universal national Pharmacare. Together with a number of prominent academics, the CHC is contributing significantly to the debate. As a result, the idea of Pharmacare is gaining significant traction. Ontario Health Minister Dr. Eric Hoskins recently surprised us by tweeting in favour of such a plan.

What’s remarkable is the amount of work the OHC and the CHC have done to galvanize public support for the core public principles behind Canadian Medicare.

OHC Director Natalie Mehra has probably logged more miles than anybody in Ontario to reach out to far-flung communities to protect our public health care and raise the alarm.

The offices the OHC maintains are small, hot, cramped, and often filled with volunteers and boxes of fundraising garlic. Mehra frequently has to keep one eye on developments at Queen’s Park and the other on the organization’s very tight budget.

In the last few weeks we’ve also been working with Moyo Theatre, who themselves have worked tirelessly towards a bill that will prohibit paid plasma donation in this province. OPSEU is proud to support the tour of Kat Lanteigne’s play Tainted, which not coincidentally, is playing on the Saturday night of the OHC’s Action Assembly Weekend October 18-19.

At this week’s Ontario Health Coalition board meeting there was discussion about using social media to remind us all on this thanksgiving weekend of the public health system that is still standing despite the well-funded opposition to it.

If we are to give thanks, perhaps it should also be to organizations like the OHC, the CHC and the many others that are plugging away at defending the public interest.