OPSEU is ratcheting up the campaign against the Wynne government’s relentless attacks on Ontario’s health care system.  Here’s what’s happening across the province: 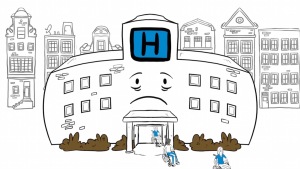 For example, in 2014 Ontario brought in regulations making it easier to outsource community hospital services to private, for-profit clinics. These clinics typically take on low-risk, high-profit procedures such as cataract and colonoscopy services. This sucks money away from public hospitals.

Prior to the federal election, federal Liberal leader Justin Trudeau said that “some of our greatest achievements as a country – the things that matter in the daily lives of Canadians – came about when federal, provincial, and territorial governments worked together to forge solutions to complex problems.  One example that touches all Canadian, in a profound and personal way, is medicare.”

He also said that “our health care system isn’t perfect, but it represents the best of Canadian federalism. It’s flexible enough to respond to the different regional needs, while protecting the national principles Canadians hold dear.”

It’s time for that flexibility to kick in.  A good start would be for our premier to say to the prime minister that Ontario desperately needs federal financial assistance to rebuild a once-proud health care system in this province.

But Trudeau knows the Wynne government has only itself to blame for its supposed financial difficulties. Corporations in Ontario have enjoyed a windfall of tax cuts that started with the Harris Conservative government and continued under the Liberals.

These and other cuts are costing the provincial treasury $20 billion a year. So it may ring a little hollow when Wynne says to Trudeau that she needs help because the Ontario cupboard is bare.

Still, Trudeau must help rebuild Ontario’s once-cherished public health care system, and help other provinces as well.  But Wynne could make Ontario’s request more attractive by showing she is willing to do her part.  She should use her legislative majority to restore the corporate tax rate to earlier levels.  That would raise more than $2 billion a year right away.

Later this week the federal/provincial/territorial Health Ministers meet in Vancouver.  It would great if our Health Minister, Eric Hoskins, could truthfully tell his colleagues that Ontario is committed to restoring a strong public health care system.