Rachlis says Canadians can fix Medicare by completing it

Dr. Michael Rachlis has got a great story to illustrate the folly of the current hysteria around health care spending. He talks about a family where one of two sons has died. The remaining son is told the family can no longer afford to feed him because he now takes up 33 per cent of the family’s food, compared to 25 per cent of the food when his brother was alive.

Rachlis told an Ottawa meeting of NUPGE’s Canadian Health Professional Secretariat November 25th that public health care spending is only slightly higher than its previous peak in 1992. When the economy shrinks in a recession, health care appears to consume much more as a percentage of that economy. Like the surviving son, it has little to do with increased costs and much to do with the economy it exists within.

As Canada recovers from the recession, already health care spending is decreasing as a share of the economy.

However, there is more to the story than the ups and downs of the Canadian economy.

Since 2000, taxes have been cut by 5.3 per cent of the size of the Canadian economy. That means there is $85 billion less available each year for all public services, including health care. “What if you only cut taxes by half that amount?” he asks. “Imagine what we could with $40 billion more each year?”

While the United States continues to stand out for its high health care costs, Canada’s spending is comparable to other wealthy nations. Spending in France, Switzerland, Germany and Austria is slightly more than Canada’s. Belgium, Portugal, Netherlands, New Zealand, Denmark and Sweden are slightly less.

Rachlis says we should be proud of Medicare and its principles – but the job is yet complete. Tommy Douglas warned that the second phase would be much more difficult to implement.

“We should acknowledge that there are problems with Medicare,” Rachlis says, “but these problems are because it has never been fully implemented.”

Models based on group practice and integration of public health care have been shown also to be cost-effective.

He says immigrants tell him that they chose to come to Canada because of Medicare. 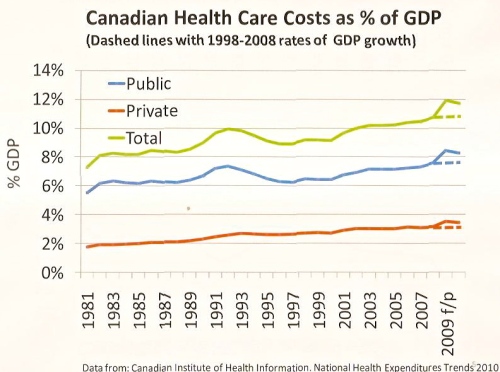 This graph shows public spending has gone from 6% of GDP to just over 8% in 30 years. The last upturn reflects the shrinking of the economy in the latest recession, not a large increase in spending. The dotted line shows where spending would trend had the growth in the economy remained stable -- below 8%. This is hardly the image of health care spending out of control. The level of growth has been particularly flat during the last decade. 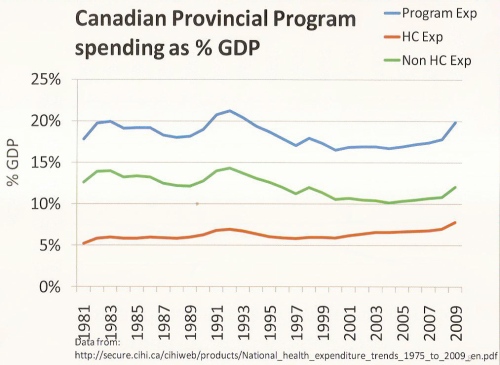 Canadian provincial program spending as a percentage of GDP. Public spending on health care has been relatively flat for 30 years. Declines in non-health care expenditures owe more to the impact of tax cuts that increases in health care spending. 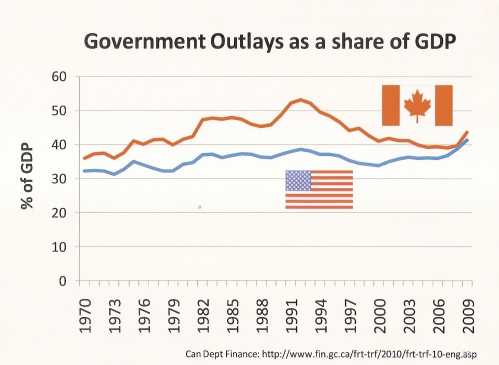 This entry was posted in Health System. Bookmark the permalink.