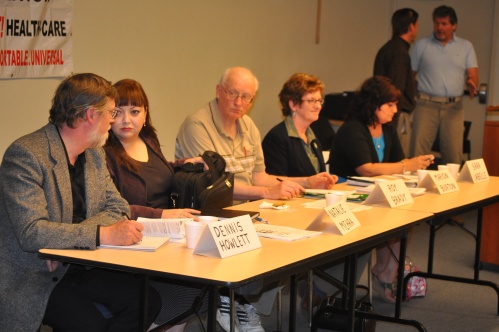 “There were going to freeze social assistance rates until the NDP negotiated a better deal,” said Howlett.,“yet the best way to reduce health care costs is to reduce poverty.”

Howlett told the town hall meeting that poverty condemns people to a lifetime of poor health, yet the government is doing little to address these upstream issues.

While the Health Minister has been talking in recent weeks about choices, the panel discussion addressed some of the poor one’s made by the McGuinty government.

“If you don’t provide mental health, for example, they end up in jail,” Howlett said. “Jail is the most expensive and worst place for people with mental illness.”

Sara Labelle, Chair of OPSEU’s Health Care Divisional Council, gave numerous illustrations how privatization was driving up costs to hospitals, including diversion of community lab testing to private for-profit labs. Such privatization not only cost the government more, but left the hospitals with smaller volumes that made them less efficient.

She argued that cuts had a ripple effect, crossing over into other sectors. Not enough long-term care beds meant patients stayed longer in hospital. That means patients cannot get out of the emergency room for lack of available hospital beds. Longer waits in the ER tied up ambulance crews. 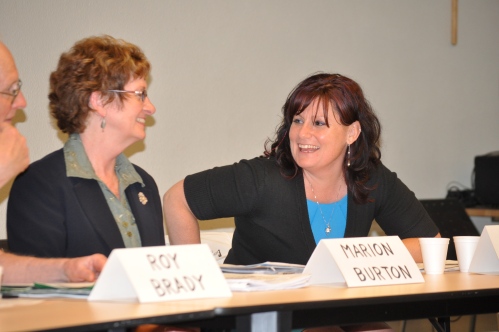 Roy Brady, Chair of the Peterborough Health Coalition, said cuts to their local hospital were having an effect on staff morale and creating doubts in the community that impact confidence in the hospital.

“Any positive good work done by the government is now being undermined by this budget,” Brady said.

He argued the continual process of restructuring was costly to the health system and was taking away resources from needed front line care.

Marion Burton, a local municipal councilor and OPSEU local president at the hospital, said cuts were making excessive demands on workers, noting a recent study that estimated three out of five health care workers in Ottawa were stressed out from role overload.

“Given the pressures they are under, the author of the report was unsure how they could continue.”

She said at Peterborough turnover of nursing staff was particularly “chronic.”

Natalie Mehra, Director of the Ontario Health Coalition, said the province’s health care system was not able to sustain a new round of austerity, noting 18,500 hospital beds have been cut since 1990 and that 30,000 people were waiting for long-term care beds and another 10,000 for home care.

Mehra said warning communities about the coming cuts to health care was difficult while the budget was still before the Ontario legislature. The real cuts won’t be apparent until the fall, she said.

After an audience member complained of fast rising private dentistry costs, Labelle pointed out that it too was another false economy given those who cannot access appropriate dentistry are subject to gum disease, which in turns leads to a variety of more serious illnesses that become the responsibility of the Medicare system.

Howlett said that we would also save “a bundle of money” if Canada pursued a national pharmacare program.

“It costs you more to do these things privately that what you would pay in additional taxes,” he said. 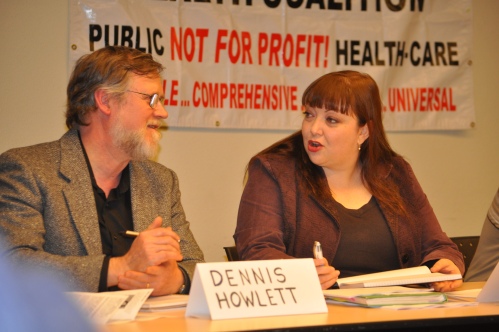 While one senior stood up and said she would be willing to pay more tax, Howlett said he feared governments were undermining public support for taxation in two ways.

“People need to believe the tax system is fair and will deliver quality services,” he said. Both the federal and provincial governments were making taxes less fair while cuts undermined the quality of public services.

To find out the locations and dates of more Ontario Health Coalition forums, click here.