It’s a question of individual rights versus collective rights. The evidence is far from perfect, and the issue highly divisive among health care workers.

The influential Canadian Medical Association Journal raised many eyebrows when it recently took the position that all people who work in a health care institution be vaccinated for influenza.

The CMAJ’s Dr. Ken Flegel says the views are those of the editors of the Journal, not that of the Canadian Medical Association. There’s a good reason for that – most doctors do not get the annual flu shot. Speaking to a Toronto meeting of the National Union’s Canadian Health Professional Secretariat on November 20, Flegel laid down a challenge to the group: increase voluntary vaccination rates to avoid having the flu vaccine made mandatory in your province. 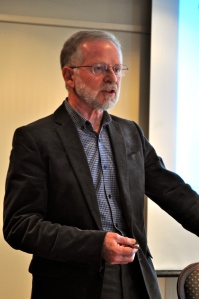 British Columbia is the first Canadian province to take that step — a move health care workers in that province are challenging. While many support the need for broader vaccination rates, most unions are reluctant to give up the autonomy of health care workers to decide what goes into their body.

In Ontario many health care employers have defacto mandatory requirements – if you don’t get the shot, you don’t work under certain circumstances. Others are more willing to move unvaccinated health care workers to environments where there is less risk to patients or suggest that workers use up vacation credits when an outbreak takes place.

That population is particularly at risk given workers can be asymptomatic and still shed the virus.

Flegel admits that research on the effectiveness of the flu vaccine is very limited, but randomized trials suggest that between 5-20 per cent of seasonal mortality could be prevented if staff vaccination rates were improved.

“That’s huge,” he says, although admits the studies have been challenged as being too small to be entirely validated.

While not perfect, there is enough evidence to suggest a significant benefit he says.

Flegel does admit that workers are only one source of the flu virus – estimating that the flu in hospitals is carried 40 per cent by health care workers, 40 per cent by visitors, and 20 per cent by patients.

Nor is taking the vaccine a guarantee that you won’t get the flu – he says recent studies have downgraded the efficacy, but it is still at least 50 per cent.

He says you can’t ask visitors to increase their own rate of vaccination without first setting an example among hospital workers.

Flegel admits there are some people who should never have a flu shot, ranging from those who have a negative physical reaction to those who simply could not sleep at night over the prospect of the vaccine.

While the effectiveness may be at issue, Flegel says the science would indicate the vaccine is “believed by experts to be safe.” In fact, he says, the flu vaccine has less risk than vaccines travelers often receive without question.

The issue is also clouded by other contradictions.

While hospitals are urging workers to get the vaccine, attendance management programs also encourage workers to come to work sick and place the same patient population at unnecessary risk.

As hospitals routinely discipline workers over issues of patient confidentiality, some Canadian hospitals are violating that same confidentiality by making workers wear stickers saying they have had the vaccine, or wearing a mask to indicate they haven’t.

Others worry that surrendering such personal autonomy will lead to other intrusions by the employer, including mandatory drug testing.

Let us know what you think by commenting below.