Pharmacare 2020: A remedy for an accident of history 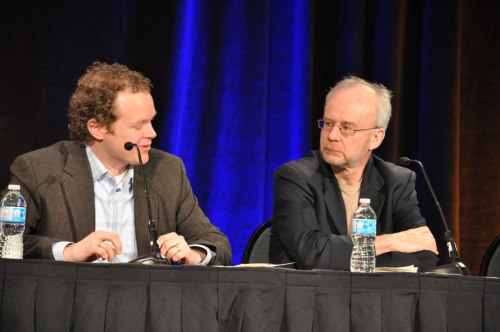 On the second day of Pharmacare 2020, the talk turned to how we get to a quality system that will leave no Canadian behind, that will be efficient, accountable, and evidence-based.

Saskatoon health policy analyst Steven Lewis says leaving drug coverage out at the dawn of Medicare was an accident of history. If we were to create a pharmacare program from scratch, the task would be much easier. The problem is how do we transition from the house we built for ourselves to the one we want to live in?

Another audience participant astutely remarked that from the 30,000 foot level there is a great degree of consensus, but getting closer to the ground is going to be more difficult.

Lewis is blunt about the reasons why – a public pharmacare system would create winners and losers. Doctors would be the winners – a public pharmacare system would better mirror their existing practices. It would be more difficult for retail pharmacists who may need to define what their role is within the health system. Should they be remunerated as the owners or employees of a retail outlet, or should they join the mainstream of health professions and get remunerated based on the service they render to the public?

The biggest loser would be the insurance industry. The biggest winner would be private employers who would experience a substantial economic benefit by being relieved from the responsibility of providing their employees with drug plans. Throughout the two days the tensions were there in the room between these groups.

Many patient groups were also in the room demanding to be let into any process to follow. There was much unease when the issue of support from big pharma to patient groups was raised. Several patient groups got up and vehemently denied money from drug companies coloured their goals and perspectives.

Mike McBane of the Canadian Health Coalition says pharmacare mirrors our mostly closely held values. “If politicians don’t see the light, they should feel the heat,” he said.

Lewis says that part of the difficulty of transitioning to public pharmacare is that governments have systematically reduced their tax base. Is there an appetite to raise taxes when the middle class are largely protected by private employer drug plans? Those who do not have access are not a powerful group, raising the question of whether as Canadians we can politically muster enough social solidarity to make this happen?

The Canadian Taxpayers Federation (CTF) were present, denigrating government by preposterously linking the failed gun registry to the impossibility of government ever efficiently managing a national pharmacare system. Not every right-wing group out to defeat public pharmacare is as unsophisticated and unconvincing as the CTF. The difficulty will be to find enough common ground to move the yardsticks.

It is clear from the two days that there are enormous benefits to getting this done. Estimates of savings, depending on the system chosen, can be as much as $14 billion a year. It would also offer up the opportunity to integrate pharmaceuticals with the rest of the health system. Treatment choices should be based on best evidence, not on whether or not a patient has coverage or who is more susceptible to influence by big pharma’s marketing efforts.

Conference Chair Steve Morgan pointed out that drug reform would likely create sufficient efficiencies to be able to provide free generic drugs to any citizen that needed them.

Lewis says that at present physicians don’t worry about drug costs because it doesn’t come out of the same pool of money that funds them. What if it did? It does in Britain.

Lewis says we can do something very practical: at present pharmaceutical companies spend between 20 and 40 per cent of their budget on marketing. This is tax-deductible. Lewis says we should limit tax deductions to no more than a five per cent spend on marketing.

He also says it’s time to do research based on an epidemiology perspective. Public research would be less ethically fraught for researchers than the present collaborations between universities and big pharma. A consortium of universities could band together to create an agency to do this work.

Most in the room believed that beginning with a national program is a pipe dream. The search will likely be for the first province to take this up for its citizens, setting the stage for others to follow much in the way Medicare was introduced into the Canada. Who will be on the vanguard? 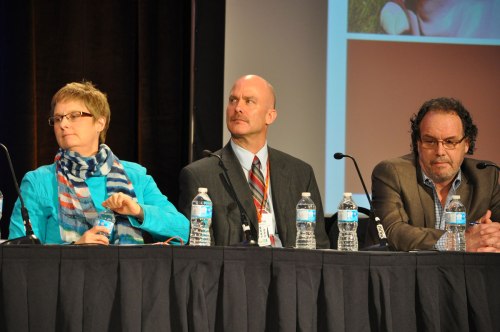 L to R: Anna Reid, President of the Canadian Medical Association, Mark Collison, Director of Advocacy for the BC and Yukon Heart and Stroke Foundation, and Dan Clow of GSK.

Any eventual national system will likely be based around consistent regulation and standards, and perhaps willingness by the federal government to fund the provincial programs. We were reminded that the Canada Health Act is proof that the Federal government can play a complementary role in ensuring access to health services is not entirely based on postal code.

Provinces have made a start. Quebec is the only province that has universal pharmacare coverage, although the system came under much fire during the conference. The problem is Quebec has a mixed private-public system based on insurance. Like the U.S., Quebecers are forced to buy their insurance, which is deducted at source from their paychecks. If no private plan is available in the workplace, they must purchase the province’s own pharma plan.

Ontario has chosen a different route – try to fill in the gaps in coverage. Seniors and those on social assistance are eligible for Ontario’s version of pharmacare, as are those who face catastrophic drug costs that eat up more than 4 per cent of their annual income.

BC is setting a similar cap on drug spending to protect citizens from catastrophic drug costs.  BC has the worst rate of cost-related non-adherence in the country. More than 15 per cent of BC residents cannot afford to fill their prescriptions.

Saskatchewan used to have universal pharmacare coverage, but Lewis suggested that there was not good cost management and the province became unable to afford the escalating demands on its health budget. Despite that experience, he believes we can overcome these problems.

Most speakers on the podium – with the exception of the Canadian Taxpayers Federation – have established public positions in favour of some model of pharmacare. That includes the Canadian Medical Association. President Anna Reid recounted how the lack of pharmacare directly impacted her patients, from those who would skip medications to those who simply could not access them at all.

She says the place to start is by filling in the gaps first — find ways to cover those presently without insurance. She cautioned that if we tried to get pharmacare in one step it would likely fail.

Calling for a national pharmacare program, the CHC’s Mike McBane said we should aim to cover every patient, not every drug, a reference to poor prescribing patterns. He specifically indicated that in France half of all drugs were either useless or dangerous.

Dan Clow of drug manufacturer GlaxoSmithKline said pharmaceuticals are but one wedge in the health care pie. His vision is for an integrated system that includes cost management, outcome management, equity, cooperation and sustainability.

During the two days it was evident that New Zealand, a small country of 3.5 million people, was able to do some of the best negotiations on pharmaceutical prices in the world. Lewis says we need to learn how to bargain like New Zealand.

As a nation, our pharmacare situation is not normal compared to the rest of the globe. The question is, do we have the will to overcome our differences and do the right thing for all Canadians?

2 responses to “Pharmacare 2020: A remedy for an accident of history”