Debate should be about better public care, not defending status quo 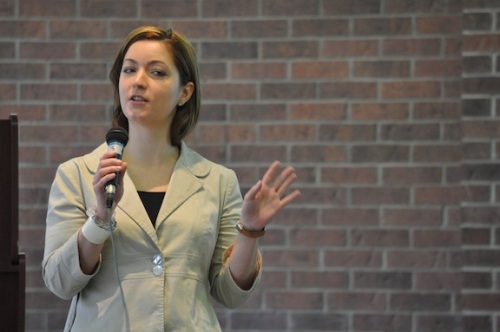 Opponents of Medicare argue that privatization or two-tier health care is the answer to the problems that face Canada’s health system.

The trap is to get caught defending the status quo in that debate.

Chair of Canadian Doctors for Medicare, Martin argued at Saturday’s Students for Medicare conference that we should be advocating for a better public system, not defending one that shows mediocre results for what Canadians are spending.

“Who thinks long waits are acceptable?” she asks the room.

Martin argues that what is driving cost is not aging or population growth, but increased utilization of the health care system by all ages.

“More docs, diagnostics and drugs – are we any healthier as a result?” she says.

After debunking the myth of unsustainability – health care costs relative to the size of the economy have remained relatively stable in Canada – Martin says many of these costs are being driven by physician behaviour. Clearly physicians have some responsibility in addressing rising costs.

However, Canada also stands out in the proportion of our health system that remains totally private. Only 69 cents of every health care dollar is spent publicly. While our combined private and public health care costs are per capita 6th among OECD nations, the amount we spend publicly is much lower.

That private component includes a significant proportion of prescription drugs, where she says Canada is not unlike the United States.

She says the U.S. has really four health systems – U.S. Medicare (for seniors and the poor), the Veteran’s Administration (which resembles Britain’s National Health System), employer health insurance, and the fourth where 50 million Americans are without any coverage. Depending on which of the four systems Americans are aligned, the experience is radically different.

“It is virtually the same situation in Canada when it comes to pharmaceutical coverage,” she said.

Almost one in five Canadians have no insured drug coverage. One in ten do not take their medication as prescribed because of cost.

Health care administration in the United States is estimated to take up 31 per cent of all health spending.

But what about two-tier health care? The wealthy argue that they can free up their portion of the public system if a second tier existed for them.

One conference attendee argued rich people should be able to spend their money they want to.

Martin says the problem is there is no ocean liner of health professionals out there and that Canada has very little underutilized health care capacity.

Therefore, a second tier would come at the expense of capacity in the first. When Australia introduced a two-tier system the results were longer waits for public care in parts of the country where more private second-tier health care existed.

“Every health system rations care,” she says. The fundamental question is, are we going to ration care based on need or based on the ability to pay?

While rich people may want to spend their money accessing faster care, the courts have recognized this is a trade-off of individual versus collective rights.

She says while former Canadian Medical Association President Dr. Brian Day has suggested there are surgeons willing to work longer hours to create that second tier, surgeons do not work alone and require support professionals, many of which are in short supply.

This entry was posted in Uncategorized and tagged Dr. Brian Day, Dr. Danielle Martin, Students For Medicare. Bookmark the permalink.

2 responses to “Debate should be about better public care, not defending status quo”