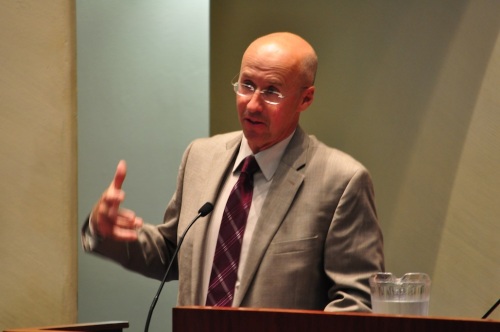 During an open forum hosted by the Older Canadians Network, former federal budgetary watchdog Kevin Page speaks about the bumpy ride he had in office.

Federal Conservatives sure liked to talk about accountability while in opposition. In power? Not so much.

That puts a budget watchdog in a very difficult situation.

While appointing Page to the job to fulfill his own election promise, Stephen Harper made the appointment at the “pleasure” of the Prime Minister’s office, not that of Parliament.

Appearing in Toronto Wednesday to accept a humanitarian award from the Older Canadians Network, Page said the appointment by the PM’s office meant he could be removed from office at any time by the Prime Minister’s office – a major flaw in the design.

When he was first appointed five years ago, opposition members on committees just assumed he was the “PM’s guy.”

Others said they hoped he didn’t think he was going back to the civil service where he had worked most of his career. (He hasn’t – Page is presently unemployed)

Far from being partisan towards his employer, Page exceeded expectations in his first two reports, which earned his office a steep cut in their budget from the PMO.

Now that Page’s five-year term is up, the Harper government not only failed to give him a second term, but passed over three others in his office “with amazing CVs,” he said.

Two months after Page was shown the door, there is no parliamentary budget officer.

“My office will start to unravel,” Page told the audience made up of mostly seniors.

The former budget officer is proud of his five years, making available what he calls decision support to all parliamentarians.

“It strengthened their hand, leveling the playing field for Parliament.”

Their reports are even accessible to the public on the office’s website.

All the reports were peer reviewed internationally for free by experts who were out there ready to help.

Being the budget watchdog “was a bumpy ride for sure,” he said. “It puts you on the edge.”

The first is that change is disruptive. For the second he quotes Einstein, who said in the middle of difficulty you will find opportunity.

“It is the best time to be a public servant because it has never been this bad,” he said to laughter.

The third thing he learned is actually from a book – Why Nations Fail by Daron Acemoglu and James Robinson. There are three reasons why nations fail – concentration of political power, legislatures that cannot hold government to account, and the moment when we stop giving young people opportunities.