Afraid of losing control — a found message from HealthAchieve 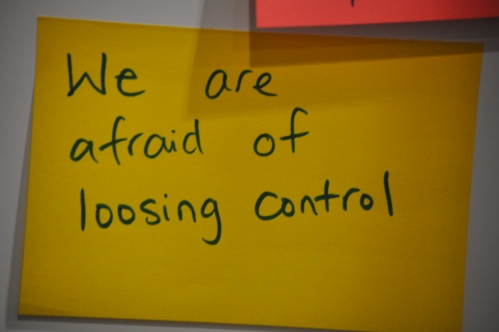 At this year’s Ontario Hospital Association HealthAchieve the organizers hired a graphic artist to illustrate many of the sessions. After each session, participants were invited to look at the graphic and leave their own comments behind using Post-it notes.

Amid all the talk of living in times of revolution and the need to recognize creativity throughout our organizations, one person put up a note that said: “we are afraid of loosing control.” We can only assume the individual was a bit spelling-challenged and meant “losing control.”

That was probably the most frank statement we saw over the three days.

Despite being challenged by some great international thinkers – including Sir Ken Robinson and Ray Kurzweil – this year’s conference seemed to be missing some of its usual mojo.

These are hard times for hospitals despite the plethora of construction cranes that hover above them.

OHA Chair Marcia Visser urged restless delegates not the leave the room after Ray Kurzweil finished his Wednesday morning keynote presentation. She tried to buck up the troops by talking about the “inevitability of transformation” but it only seemed to reinforce the gloom.

After Health Minister Deb Matthews spoke to what became a two-thirds empty hall, one CEO we overheard on the escalator expressed disappointment over the lack of content in her speech.

It’s essentially the same speech Matthews has been delivering over and over in the legislature. This is how many doctors we hired since 2003. This is how many nurses. We have to make hard decisions, blah blah blah. We’re sure the CEOs were counting up just how many health professionals they were still going to have to let go to balance their budgets. Our colleagues at the Ontario Nurses’ Association tell us the College of Nurses own numbers show a decline of about 1,200 nurses within the last two years. With an unprecedented freeze on base funding to 2018, these folks are going to have to get creative very quickly.

The Ministers speech was about the past, not the future.

If that wasn’t enough, the OHA must know that should the PCs get elected next spring, that everything gets tossed up in the air. Given PC leader Tim Hudak’s promise to escalate the level of austerity and give away further corporate tax cuts to placate Bay Street, it’s not likely the cavalry are outside the gates and about to effect a rescue. Even the NDP said in their last election platform that we have to live within our means.

The animated pin wheel engine that became the conference logo has one word on it: evolve. If only.

There is another term that has been around for a number of years: burning platform.

With no new funding to account for population growth and aging, let alone inflation, it’s getting mighty hot underneath.

The conference opened with Canadian astronaut Chris Hadfield speaking about his experiences in space. The conference closed with Deb Matthews definitely bringing everyone back down to earth.