Health Accord: End of 10-year agreement sad reflection on leadership 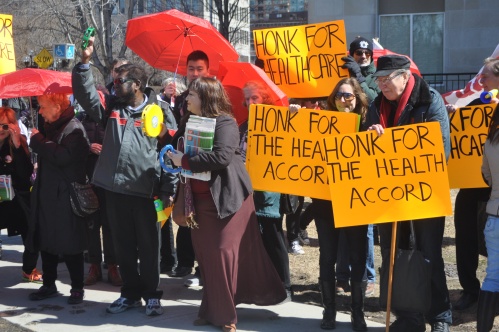 Today is it. It’s the last day in which we can claim to have a national plan towards health care reform.

Starting tomorrow the Harper government is simply cutting the cheques and walking away from the table, leaving the provinces and territories to work out the details of how we move forward – or backward – on the national health care file. Never mind that the Feds are the 5th largest direct health care provider in Canada.

The Harper government has always appeared much more comfortable involving itself in health care commercialization than in ensuring Canadians have public access to quality care.

If Canadians feel ambivalent, it may be because the 10-year agreement was never a resounding success.

Early signs showed that it was beginning to make a difference, but the election of the Harper government and the 2008 financial crisis certainly changed the outcomes one could have reasonably expected.

Certainly the expectations were absurd – did anyone really believe the hyperbole that this would truly fix health care for a generation? It may have made everyone feel great back in 2004, but how could it ever succeed if this were to be benchmark for success?

Part of the problem was there were two major streams to the initial plan – the first to invest in services and drive quality through reform and best practices, the second, to realign the percentage of health care costs borne by the federal government.

As provincial coffers got squeezed by the recession, the latter of the two objectives became more important. Having the federal government pay more while the provinces pay less hardly makes much of a difference to front line care.

If one looks at recent and modest increases in funding for health care in Ontario, most of that increase is represented by the 6 per cent federal transfer. The overall increase in funding – a little more than 2 per cent – is less than what it takes to stand still against a backdrop of inflation, aging, and population growth. Why would we expect any success given those circumstances?

Having an anti-government party in power in Ottawa also means it is less likely to address even the low-hanging fruit, such as reforming how Canadians access prescription drugs.

Recent studies have shown we could expect to save as much as $14 billion on our drug bill had we taken an approach more similar to other developed countries with universal health care systems. That’s not small change when one considers total spending (public and private) on pharmaceuticals is approaching $25 billion annually in Canada.

The ripple effect of expanding coverage to those who cannot presently afford their medications also has the potential to reap significant savings in the present public system. About one in ten patients showing up in our emergency rooms are there due in part to non-compliance with their doctor’s prescription.

A new accord also might have addressed the gap in information technology between Canada and much of the rest of the developed world. Studies have shown that more information savvy systems are capable of achieving much higher levels of measureable quality. If your doctor’s office cannot send you a 50th birthday card with a notice that you are now due for screening, then perhaps we should be measuring such costs against the downstream health effects of foregoing early diagnosis.

With the end of the health accord also comes the dissolution of the Health Council of Canada. If you go to their web site to access one of their many publicly-paid for reports, you may be out of luck. When we tried this morning the site was gone.

The Health Council of Canada was charged with not only monitoring progress on the accord, but also in sharing best practices and successes.

There are other sources for health information and analysis – most provincially based – but it is one less body to spur change in the way we deliver health care.

Today many of us will be participating in events around the Canadian Health Coalition’s National Day of Action surround the demise of the accord.

It’s not what was or wasn’t achieved in the last decade that matters, but what could be achieved going forward had Canada had a government in power that could have shown true leadership.