Was Monday really a tipping point? 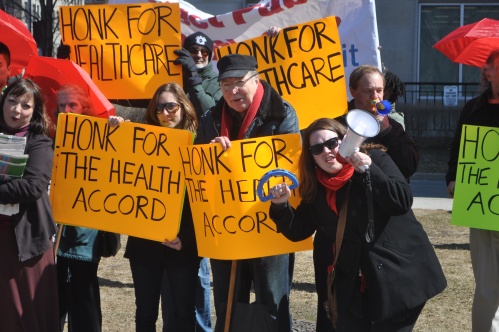 Honking for Health Care on University Avenue in Toronto.

On Monday I saw Ontario Health Coalition Director Natalie Mehra at a noon-hour rally on University Avenue. As far as rallies go it wasn’t a big one. About 50 people showed up to hold up signs urging motorists to honk for a new health accord. So many motorists did just that it became, at times, hard to hear each other speak.

Mobilizing people around the health accord is not the easiest sell. The health accord is a complex issue about planning, standards and funding. When you really strip it down, however, it’s really about the future of Medicare in this country.

I was recently asked by a gas station attendant about a button I was wearing with a red umbrella and the text “Canada Needs A New Health Accord.” With customers waiting behind me I had to explain in 30 seconds what it was about. That’s not so easy and made me think if I found this difficult, what about a 10-second sound bite?

March 31st we all were wondering if we just bit off more than we can chew.

Mehra has been circling the province in recent weeks working on five regional campaigns intended to pressure the government to back off on a plan to contract selected hospital services to private clinics. The campaigns are due to culminate this weekend in Windsor, London, Kitchener, Sudbury and Peterborough. Her enthusiasm has been infectious as she tells us of all the cards that have been collected to date.

OPSEU has been supporting that campaign, plus doing developmental work on a new initiative to support national pharmacare, organizing a summit meeting to look at new ideas towards workplace safety in mental health, advocating for a review of the efficacy of hospital mergers, participating in the legislature’s review of the Local Health Integration Networks, urging swift passage of an Act prohibiting paid blood and plasma donation as well as participating in dozens of local issues – many of them involving cuts to health services.

We never want to fall into the trap of defending the status quo especially given the long list of grievances patients have against the present system. Therefore any opportunity to take a fresh look at new ideas is always of interest. Last week I also therefore attended a Longwood’s forum on big data, looking at the quality evidence behind the introduction of new information technology in health care settings. (More on this to come).

We are not alone in this level of activity. Many of our colleagues in other unions and other community-based advocacy groups are in the same boat.

For many of us “usual suspects,” the winter months have been one long grind of activity.

That’s also why the federal government’s response has been so disappointing. There is clearly much potential — just no political will to get there.

Standing there in downtown Toronto, I felt we could have done more given the importance of the health accord. If only.

But an amazing thing happened. That evening I attended Holler 4 Health Care with about 600 others. Holler 4 Health Care wasn’t organized by the usual suspects. It came out the Trinity-St. Paul’s United Church Circle on Faith, Justice and the Arts. The organizers – David S. Craig and Paul Ledoux said they were responding to the Canadian Health Coalition’s call for a National Day of Action. In just six weeks they pulled together a fast paced two-hour event involving more than 30 performers. 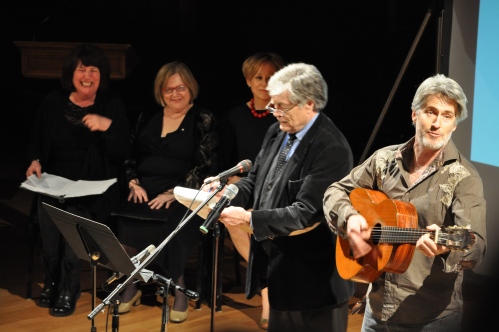 The actor who portrayed Jack Layton in the CBC mini-series – Rick Roberts — was there. So was Michael Therriault, who portrayed Tommy Douglas in Prairie Giant. Douglas’ daughter, Shirley Douglas was there, and her son Keifer Sutherland sent along a video. With all these people in the room suddenly the moment we are in was placed in the context of a much bigger historical struggle, even if some of those historical figures were represented by actors.

The next day we were stunned to receive e-mails and photos from across the province showing many more events that took place in locations like Thunder Bay, Kingston, Ottawa, Sault Ste. Marie and Oshawa. There were also pictures from protests in other provinces.

In all, there were 40 locations where citizens took up the call from the Canadian Health Coalition and made the Day of Action what it was. That’s thousands of Canadians who came out to talk to their fellow citizens about something as arcane as a health accord. Imagine that!

I sent some pictures from Monday night to a colleague who came out to the Toronto event last night. She said she was so inspired she sent a letter off to the Prime Minister this morning. I did the same. You can too.

If you are game to take this all up a notch, so are we. Our precious health care is too valuable to let go. We all need to play our part. Let’s talk about it.
– Rick Janson

This entry was posted in Uncategorized and tagged Health Accord, Holler 4 Health Care, honk for health accord, Natalie Mehra, Stephen Harper. Bookmark the permalink.