The end of efficiency – will appropriate care become the new system of rationing hospital services? 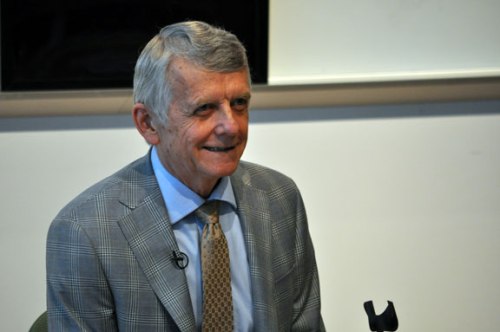 The relentless pursuit of efficiency may be coming to an end for Ontario hospitals.

As former OHA chief Tom Closson said today at Longwood’s Breakfast With The Chiefs forum, year after year it gets more difficult for hospital CEOs to balance their budgets — “you can’t cut the same thing as you cut last year.”

This hardly means that hospitals are about to enter a new era of sustainable funding, especially in Ontario where public health care spending is already the lowest per capita of any Canadian province. Closson says Ontario hospitals also have the lowest worked hours per weighted case, the shortest length of stay in acute care, and the fewest beds per capita.

Have we found bottom yet?

Closson says we still have to reduce costs “because we have to.” Instead of seeking more efficiency, a new approach is needed.

Closson was joined by the Hay Group’s Mark Hundert and Chris Helyar to preach the new orthodoxy of appropriateness and to suggest that the HBAM (Hospital Based Allocation Model) of funding needs fixing.

The idea of appropriate care is not entirely new – in the United States the Choose Wisely campaign has been under way since 2012, trying to convince doctors to make more evidence-based recommendations and to prescribe more appropriate care.

Closson says so far the campaign has not been that successful, the physicians mostly pointing fingers at other physicians rather than looking at their own practice.

If you want to see how money buys you nothing, look to Alberta says Closson. Between 1996 and 2011 hospital spending increased by 225 per cent in that province compared to 98 per cent in Ontario.

The idea of appropriate treatment means looking at variation in practice across the province. For example, you are three times more likely to get a hysterectomy in the North East LHIN than in Toronto. In the South West LHIN it’s about double the rate of Toronto.

That doesn’t automatically assume that one region is prescribing treatment more appropriately than another – the reasons behind such disparities need to be examined.

“They want those hysterectomies in North Bay,” says Hundert with a smile.

The reasons for the differences could include the fact that the hospital “may be the only game in town,” whereas there may be community alternatives in other parts of the province. Sometimes it can be cultural.

Hysterectomies are not the only variation. In North and South West Ontario you are far more likely to be admitted to a hospital bed for COPD (chronic obstructive pulmonary disease) than in Toronto. Admissions for mini-strokes – transient cerebral ischaemic attacks – vary from 8 per cent to 38 per cent. Far more hip replacements take place in the South East LHIN than the South West LHIN. The South East rate is almost double. In fact, most procedures widely vary across the province, something Closson says hospital CEOs are likely unaware.

Closson says that there was a time when, as CEO of Sunnybrook Hospital, he had no idea how long patients were waiting to access the ER. By looking at the variations within the hospital utilization rates it does start raising questions about why such variations exist.

“Variation is not in the best interests of the patients,” says Hundert. The Hay Group board member believes that incentives could work to reduce unnecessary care.

The present HBAM funding formula is difficult to understand, lacks transparency and appears to be based on utilization rates rather than population need.

What’s hard to understand is why the utilization reports of the HBAM system show no such variation – suggesting that most LHINs are close to their target volumes.

Helyar says that by looking only at existing patient usage policy makers avoid questions around potential barriers to care.

The three presenters say that the HBAM model should return to its original idea of being a population based system. They also say that hospital boards should be engaged with the issue of appropriateness.

However, they do caution that there needs to be far more evidence to determine what is appropriate and why such variations exist.

“Evidence is going to be a bit of a problem here,” says Closson.

Ultimately designing a system where health care providers receive funding by acting appropriately is not going to be easy.

Audience members also raised the question as to how this would be received by the public. Given Closson’s early statement about having to get by on less, there is no question that many may see the process as one of further rationalization.

Closson says that in the 1990s governments did provide incentives for hospitals to treat more patients on an ambulatory basis. That resulted in a considerable change in how hospitals delivered care.