Problems at clinics should prompt rethink on competitions for hospital services 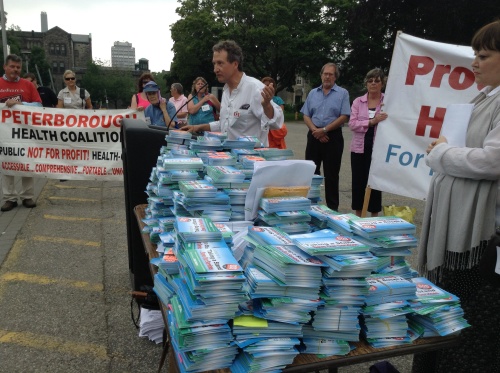 The media is applauding Health Minister Dr. Eric Hoskins this week for promising greater transparency around private clinic inspections that had previously been kept secret by Toronto Public Health and The College of Physicians and Surgeons of Ontario (TCPSO).

Tom Closson, the former President and CEO of the Ontario Hospital Association, suggested in the Toronto Star last week that “bringing out-of-hospital clinics up to the same standard as hospitals regarding transparency would increase public confidence in the care they are seeking.”

Ontario’s Action Plan for health care includes systematically taking clinical services out of public hospitals and transferring them to a sector that has a history of two-tier medicine, questionable user fees, unnecessary up-selling, significant quality control issues and too little transparency. The latest revelations, particularly around infection control at several private clinics in Toronto, may have persuaded the government not to carry out spring and summer competitions for selected hospital clinical services – at least for now.

They may have learned from the Ottawa Hospital’s ill-timed decision early in 2013 to divest 5,000 endoscopies to the private sector at the same time the TCPSO was making public the list of clinics that failed inspection public – including one Ottawa endoscopy clinic that may have exposed patients to HIV, hepatitis B and hepatitis C from equipment that may not have been properly sterilized.

This spring the Ontario Health Coalition collected more than 80,000 postcards expressing opposition to the transfer of services from public hospitals to private clinics. Without any clear indication from government whether the competitions are on hold, the coalition is now working towards a November 21st mass rally in Toronto to push further on the issue.

Earlier this year the OHC had updated their survey of private clinics in the province, noting that patient user fees were on the rise.

“The evidence from our research shows that these clinics undermine single-tier health care, increase costs for patients, sell unnecessary procedures to increase profits at the expense of patients, and violate patient trust.”

Corporate executives are likely familiar with private clinics such as Toronto’s Medcan, which according to a recent edition of Toronto Life, will conduct five-hour medical assessments at a cost of $2,595. This is in addition to an 8,000 square foot gym, valet parking, complimentary gourmet coffee, snacks and 24/7 phone access with one of Medcan’s nurses. Too bad Medcan accidentally sent out “thousands of current and prospective corporate clients’ e-mail addresses” with their annual holiday greeting e-card last year – what one client called “the blunder of the season” in the Toronto Star.

At least the executives know what they are getting into – often at their company’s expense, not their own.

For many seeking care in less august surroundings, the question of what is covered by OHIP and what is paid out-of-pocket becomes much murkier.

The OHC notes that patients are uncomfortable challenging user fees and unnecessary paid add-on services when presented by the clinic’s doctor. Often patients are led to believe services covered under OHIP are inferior as the clinics try to upsell their services to increase profits.

When patients think procedures are covered under OHIP, they may be surprised to discover administration and block fees are part of the deal.

At the Shouldice hospital – one of two grandfathered private hospitals left in Ontario – the hernia procedure is covered by OHIP, but patients have no choice about having to pay for a semi-private room, leaving most with a bill between $750 and $1,000 by the time they leave. In public hospitals patients are usually discharged on the same day – at Shouldice the stay is more likely to be three to four days.

Nowhere in this proposal does the province really discuss comparable costs between performing diagnostic and surgical procedures in or out of hospital. This strikes us as odd given the government’s present obsession with deficit.

Take MRIs, for example. A 2011 announcement by the Cambridge Memorial Hospital stated that the government was providing $800,000 to pay for up to 3,300 MRIs at the hospital. That’s about $242 per MRI for anybody lacking a calculator. By comparison, at Canadian Magnetic Imaging (CMI), a private clinic in Vancouver, MRIs begin at $895 and full body scan is $2,450. MRIs also start at $900 at Canada Diagnostic, another Vancouver private clinic.

Recently we noted the considerable difference in cost between hospital and private labs, yet the government continues to pay higher costs and limits points of access by insisting tests ordered by doctors outside of hospital go almost exclusively to the private sector. At 70 per cent of Ontario’s community-based testing, the private for-profit Lifelabs is galloping towards a monopoly position by acquiring their rivals. When that happens, watch the fee gap widen even further.

Ontario also lacks similar laws to the United States that bans self-referrals by physicians to certain procedures and tests that are publicly-insured. There is nothing to prevent an Ontario doctor from referring their patients to private diagnostic clinics they own. Duke University has conducted several studies that show patients sent to diagnostic clinics owned by the referring doctor are more likely to yield negative results – in other words, show no medical problem. That raises the question of whether patients were sent for their benefit or the doctors? This year a new Duke report suggested “cervical spine MRIs referred by physicians with a financial interest in the imaging equipment used were significantly more likely to have negative findings.”

Today it’s the challenge of transparency that has Closson throwing caution flags. While inspections by the TCPSO are relatively new, hospitals have more experience with quality control issues. The OHC report notes that hospitals have a complex regulatory regime that includes medical advisory committees, nursing advisory committees, quality of care committees, committees that review medical errors and incidents, continuous quality improvement monitoring, mandatory accreditation, as well as existing public disclosure requirements under the Public Hospitals Act, the Quality of Care Act, and the Freedom of Information and Protection of Privacy Act.

Given 97 per cent of independent health facilities in Ontario are run on a for-profit basis, this also represents a considerable transfer from the not-for-profit to the for-profit sector, regardless of the assurances the governments have made about limiting such competitions to not-for-profit providers.

David Musyj, CEO of the Windsor Regional Hospital, made the point earlier this year that such competitions make it very difficult for hospitals to carry out planning given they can’t forecast what will be in their basket of services.

If integration is the name of the game, Hoskins should be seeking to better integrate hospitals with community-based providers, not simply poach services from one to give to the other.

He also needs to strengthen existing resources and bring cohesion to a very fragmented home and community care sector before bestowing further responsibility upon it.