Eight billion reasons why we were right about P3s 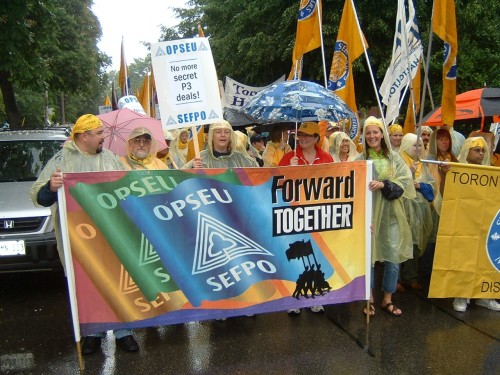 P3 protest in 2006. Pity the government didn’t listen then. In 2014 the Auditor General of Ontario says P3s have cost us $8 billion more.

If there is any trace of self-respect left within the Ontario government, Premier Kathleen Wynne should do the right thing and pull the plug on Infrastructure Ontario’s public-private partnership (P3) program now.

Auditor General Bonnie Lysyk delivered a devastating blow to a program that obscured its shortcomings for years in an overflowing super-sized container of gobbledygook.

For all the assurances Infrastructure Ontario could manufacture, it turns out that value for money came down to the “professional judgment and experience” of third-party private sector “advisors.” As Lysyk states in her report, “the probabilities and cost impacts are not based on any empirical data that supports the valuation of risk.”

For a government that has been hammering public sector workers, shuttering hospital clinics, and denying patients access to home care in the name of fiscal restraint, the Auditor General made clear they were more than willing to spend $8 billion more than necessary on private consortiums to build infrastructure in this province – the majority of it in health care. About $6.5 billion of that amount is represented by higher financing costs borne by the private sector – a general point the previous Auditor General made in the evaluation of the William Osler P3 deal in 2008.

Not only that, but Ontario is now saddled with $23.5 billion in liabilities and commitments that current and future governments will have to pay for these projects.  The borrowing costs on these liabilities add up to an additional $5 billion.

Lysyk notes that value for money comparisons were always accompanied by a disclaimer that the evaluation firm “has not audited or attempted to independently verify the accuracy and completeness of the information used in the calculation of VFM (value for money).”

In other words, they really verified next to nothing.

Further, many of the risks used in these comparisons were not borne by the private sector after the deals were signed. In one deal, where design risk was supposed to be borne by the private consortium, the hospital ended up paying $2.3 million more for two change orders on the original design.

At the time Ontario started ramping up its P3 program they tried to fool Ontarians by suggesting these “AFPs” were somehow different. After campaigning against P3s in 2003, the government looked more than a little ridiculous suddenly embracing them. A series of well-publicized P3 failures also likely led to the name change. It is interesting to note that Lysyk uses both terms interchangeably, suggesting there is no difference.

The fact that they set out to fool us on the name should tell us everything we need to know about this program. The warning bells have been there for a long time.

$8 billion dollars is a lot of money. It could  have completely paid for 27 regional hospitals the size of the Peterborough Regional Health Centre. It also represents eight times the money wasted on the cancellation of the gas plants.

OPSEU and our allies have been warning about this form of privatization for almost a decade. Pity government chose not to listen.