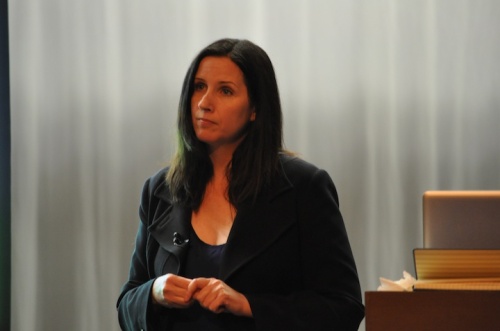 There are many ways to tell a story.

For Trish Hennessy, Ontario director at the Canadian Centre for Policy Alternatives, one way is to look at the most searched word annually for the on-line Mirriam-Webster dictionary.

Speaking last night at the Whitby Courthouse Theatre to a group of Durham-region New Democrats, Hennessy noted that in 2010 the most searched word was “austerity.” A year later it was “pragmatism.” In 2012 there was a tie between “socialism” and “capitalism.”

“Clearly something is shifting,” she said.

Many young people are being left out of the post-recession recovery and are now questioning the economic and political system that is denying them their place in society.

Hennessy says Ontario is practicing a self-defeating logic with its austerity policies. While the Wynne government cuts jobs and freezes wages, they simultaneously expect there to be a consumer-driven economic recovery. How does that take place when for the majority wages are stagnant or in decline?

END_OF_DOCUMENT_TOKEN_TO_BE_REPLACED

$12.4 billion in tax revenue lost due to recession, not overspending — CCPA

Officially Ontario ended its recession in 2009, but the effects still linger in 2013.

The Canadian Centre for Policy Alternatives estimates the “great recession” of 2008-09 and the slow recovery has taken the Ontario economy $70 billion off course. That means $12.4 billion in lost annual revenues to government – or more than our current deficit.

Austerity has not been successful in other jurisdictions, yet the Wynne government has so far said it will stay the course, impacting public services including health care.

The United Kingdom has now endured a triple-dip recession as a result of deep cuts in public spending by the Cameron government. Could more austerity by the federal, provincial and municipal governments send our own economy into negative territory, impacting both private and public sectors?

Traditional thinking has been you stimulate during lean years and grow out of your deficits in more flush times. In 2003 the Conservative government left Ontario a surprise deficit of $5.5 billion. Despite significant reinvestment in the public sector – including health – the province was able to quickly grow out of the deficit and run three years of balanced budgets.

END_OF_DOCUMENT_TOKEN_TO_BE_REPLACED

Economist David MacDonald and Ontario Health Coalition director Natalie Mehra will be among panelists speaking at a public meeting in Kingston October 26 on the privatization of proposed replacement for St. Mary’s of the Lake Hospital and the Providence Care Mental Health Services (formerly the Kingston Psychiatric Hospital).

The redevelopment of the hospitals is forecast to cost $350 million as a public-private partnership (P3) – a sum the town hall organizers say could be as much as $100 million more than had it been developed under a more traditional public procurement model.

To date the government has refused to release any of the background documents justifying the decision.

Three consortiums were shortlisted for the redevelopment at the end of August. Among them is a consortium involving the same facilities management company that presently runs the Royal Ottawa hospital in Ottawa (see link below for OPSEU’s Risky Business report on the Royal Ottawa P3).

END_OF_DOCUMENT_TOKEN_TO_BE_REPLACED

Reality checks in – austerity plan based on exaggerated deficits

In February we attended a forum hosted by the Centre for Policy Alternatives looking at the manufactured crisis the Liberals are using to bring in a far-reaching austerity agenda.

At the time, we noted that Finance Minister Dwight Duncan has a consistent history of grossly exaggerating the forecast deficit. In 2010-11 Duncan was off by 43 per cent with his forecast. Progressive economists were forecasting the actual deficit for 2011-12 would not be $16.3 billion, but come in closer to $12 billion.

They weren’t far off.

There was little attention last Thursday when Finance Minister Dwight Duncan revealed last year’s deficit was in fact $3.3 billion lower than forecast, coming in at $13 billion.

END_OF_DOCUMENT_TOKEN_TO_BE_REPLACED

The Canadian Centre for Policy Alternatives has posted on-line a one-hour video of the conversation between Stephen Lewis and Michele Landsberg recorded November 3 at the Trinity-St. Paul Centre in Toronto.

Read our BLOG story of the event here.

One sensed a subtle difference between Stephen Lewis and Michele Landsberg when it came to the Occupy Movement.

The former Toronto Star columnist said she visited the Wall Street protest site and came away impressed by the diversity of those involved and the manner in which they were working.