Following Monday’s demonstration outside the former Kingston psychiatric hospital, Providence Care is now telling staff that the job cuts and bed closures are not about funding. Really? Even though the hospital is running at capacity, even though it is next to impossible to get a loved one admitted to a bed, even though long-term projections suggest greater need for mental health services in Kingston, even though the situation has become volatile with overcrowding and understaffing, the hospital expects us to believe that this is all part of the plan.

Sigh. If this is the plan, Providence Care desperately needs a new one.

On Monday we shot video of the demonstration outside the centre (below). If you live in Kingston, please share our video with others. The campaign to reverse the cuts continues. It’s time the LHIN involves the community in a plan that actually makes sense. Stay tuned for more events. 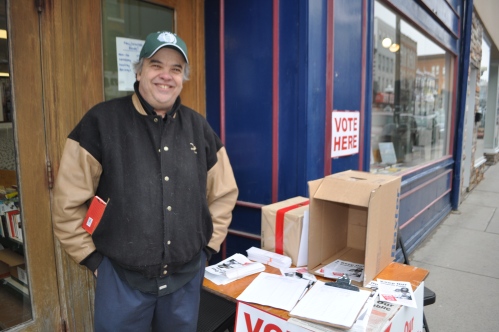 It had all the trappings of an election. There were lawn signs, TV commercials, and door-to-door campaigners. The local media solicited the views of both politicians and citizens as everyone scrambled to become informed before the vote.

Saturday Kingston residents got the opportunity to express their preference on whether a proposed new hospital facility in their community was going to be entirely public or be under a 30-year finance and maintenance contract with a private for-profit consortium.

While this election wasn’t conducted by Elections Ontario or Elections Canada, it had the feeling of being the real deal. Citizens were given the opportunity by the Ontario Health Coalition to consider a private or public option even if the result will be non-binding.

After five weeks of public debate, the answer was clear. 96% of the 9,885 votes cast at more than 50 polling stations said yes to keep the new hospital entirely public.

We have had one “official” election on this issue before. In the 2003 provincial election Dalton McGuinty opposed privatizing public infrastructure, campaigning against two “public-private partnership” (P3) hospital deals set up by then Premier Ernie Eves.

Like the results in Kingston, in 2003 the public instinctively bridled against the idea of privatizing key elements of Ontario’s public infrastructure. It helped give McGuinty the first of his two back-to-back majorities. Ontarians were already aware of what a bad deal the province got from privatizing Highway 407. They were worried about the impact of deregulation and privatization of electric power, particularly after a devastating outage in August of that year that took out much of the continental northeast.