Psychiatric Hospitals: The food is terrible… and such small portions 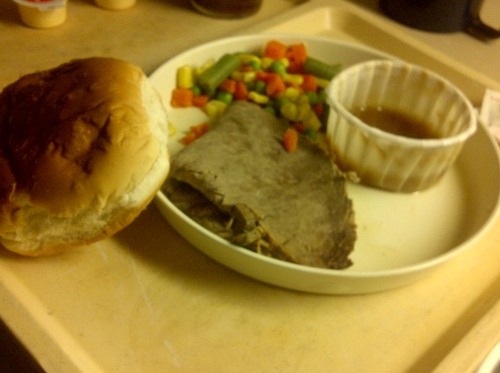 Yum. Actual meal at one of Ontario’s psychiatric hospitals.

The nurse thought it was a mistake. A large patient at Ontario Shores Centre for Mental Health Sciences was given a plate with six pieces of ravioli on it as that day’s lunch. The nurse on the unit thought it was not going to be nearly enough. When she contacted the dietary department they said there was no mistake, these are proper portions.

Staff at Ontario Shores tell us that such portions mean the same patients are down at the canteen later on filling up on less healthy foods.

Recently we asked representatives from our mental health sector if they had similar experiences to their colleagues at Ontario Shores. The answer was yes.

By being strict about calorie counts, you would think that patients would be losing weight. However, when the evening meal leaves you hungry, there are other options, unhealthy options that result in patients actually gaining weight.

In another psychiatric hospital we were told of patients ordering in fast food to fill that hunger. While delivering a pizza or Chinese food to a public hospital may appear odd, it is not uncommon.

We were told these hospitals are taking it right to the line with regard to portion size and calorie count.

END_OF_DOCUMENT_TOKEN_TO_BE_REPLACED

Hospital quality issues picked out from the fast moving stream

We sometimes get asked about how we come up with stories for the Diablogue? For us, it’s not a matter of finding stories, but prioritizing material culled from a fast-moving stream.

However, there are many issues out there, and only limited BLOG time for us. Here’s just a taste of some of the stories we missed last week:

Part of the fallout from the provincial budget is the decision to postpone a number of capital projects, including new hospitals. Nowhere is this being more felt that in Grimsby, where the community is upset that the new $138.8 million rebuild of the West Lincoln Memorial Hospital has been put on the shelf. The “Rallying for WLMH Committee” has called for a “massive rally” May 2nd. When the hospital faced closure in 1997, more than 7,000 people came out in a similar planned rally.

A new CIHI (Canadian Institute for Health Information) report raised eyebrows when Lakeridge Health and the University Health Network came out at the bottom of list of GTA hospitals. Lakeridge (with sites in Oshawa, Port Perry, Bowmanville and Whitby) pointed out that according to CIHI data, they were doing better than the provincial average on six of seven clinical performance indicators. That includes 80 per cent better than the provincial average when it comes to readmission after hip replacement surgery, and 30 per cent better on knee replacement surgery. An on-line tool that CIHI developed to rate hospitals crashed after it was swamped with users following a front page story in the Toronto Star.

END_OF_DOCUMENT_TOKEN_TO_BE_REPLACED

“Determining the net cost/benefit of local foods was not possible with the survey because of confidentiality issues associated with food service contracts.” – Local Food For Health Care (Report), Canadian Coalition for Green Health Care, August 2010

In the headlong rush to privatize, we often forget that the claims of better cost and efficiency are seldom verified, especially after some time has elapsed from the decision point.

The Canadian Coalition for Green Health Care, with a Trillium Grant from the province of Ontario, set out to assess the practicality, cost benefit, health and environmental benefits of incorporating more local food into patient and cafeteria meals.