Hospital Cuts: Barrett could be hero or goat depending on the future of Chesley’s Restorative Care Unit 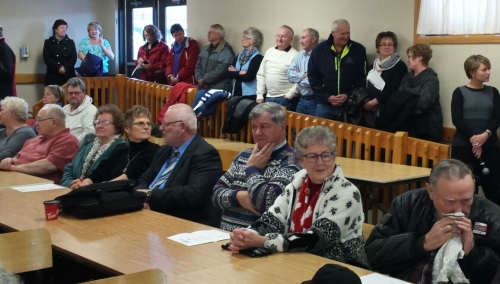 There was standing room only in Elmwood last Friday as residents rallied to save the Restorative Care Unit at the Chesley hospital.

Michael Barrett has a problem.

The CEO of the South West Local Health Integration Network (SW LHIN) now has the ball in his court as local support has been building to save the restorative care unit at the Chesley Hospital, one of four small sites that make up the South Grey Bruce Health Centre (SGBHC).

Barrett’s LHIN initially funded the 10-bed unit on a trial basis three years ago. The problem is the LHIN had no plan in place should the trial turn out to be a runaway success. There was no funding for year two or beyond. That would be the hospital’s problem.

This may not be as odd as it sounds. The LHINs frequently incubate new projects through one-time funding. Some don’t pan out. Others do. In normal circumstances, new money is often found to keep the successful high-performing programs going, but these are far from normal times.

The restorative care unit at Chesley was successful and everybody knew it. When the hospital announced it didn’t have $800,000 to keep the program running past the end of April, the community quickly rallied. The media were filled with testimonies of how the lives of patients were turned around with a few weeks of restorative care at the hospital.

END_OF_DOCUMENT_TOKEN_TO_BE_REPLACED

Dealing with an unfair funding formula, SBGHC cuts at the top (how novel!)

Here’s a story we don’t see every day: South Bruce Grey Health Centre is cutting two of its four senior management positions as part of its efforts to deal with a budget deficit.

Contrast that with hospitals such as Ontario Shores Centre for Mental Health Sciences, which carved out a new advisory position for its departing CEO at a time when front line staff are bracing for tough times ahead.

The decision may have been slightly easier to make at SBGHC given two senior managers are retiring. However, as most front line workers already know, when you cut vacant positions, it still has an impact on the workload of those left behind.

SBGHC is one of the few hospitals to have weathered the last decade without consistently running into deficit. The fact that they are now forced to trim their sails owes a lot to a punitive new funding formula emerging from Queen’s Park. Small rural hospitals weren’t supposed to be part of that formula, but because SBGHC combines resources from four small hospitals together, they do.

The irony is that by consolidating their resources these four small hospitals are being penalized. For the Hanover hospital, which has somehow managed to stay out of SBGHC despite being located within the same geographic area, they must be breathing a sigh of relief.