Richard Alvarez, former President and CEO of Canada Health Infoway, says slow pace of change among low-lights of his 10-years on the job.

When it comes to information technology, many Ontario medical practices are still more “Leave It To Beaver” than “Jetsons.” In that respect, Canada is falling behind other developed countries in integrating health care through new technologies.

Richard Alvarez, the recently departed President and CEO of Canada Health Infoway has many regrets over what he has been able to achieve after 10 years at the helm of the agency charged with coordinating federal and provincial investment in health care innovation and information technology.

Speaking at Longwood’s “Breakfast With The Chiefs” last week, Alvarez remained careful about his choice of words before a room full of the health sector’s leading decision-makers.

He needn’t have bothered.
END_OF_DOCUMENT_TOKEN_TO_BE_REPLACED

More than a third of Canadian physicians still without EMRs

When a drug recall takes place, does your family doctor have the ability to identify which patients are on that drug and notify them in a timely manner?

For more than a third of Canadian doctors that may be very difficult.

Canadian doctors have been slow to adopt electronic medical records (EMRs) and even slower to interact with patients in a virtual environment. Very few Canadians can simply e-mail their doctor or book an appointment on-line.

Speaking at Longwood’s Breakfast with the Chiefs forum this morning, Dr. Jennifer Zelmer, executive vice-president with Canada Health Infoway, points out that if patients were able to renew their prescriptions on-line, view their own test results, and consult virtually with physicians when they wanted, it would lead to 47 million fewer in-person visits and require us to take 18.8 million hours less off work to show up in the doctor’s office.

At present only 64 per cent of Canadian physicians are reporting EMR use – albeit that is up from 16 per cent in 2004. That means it’s taken nearly a decade to persuade an additional 48 per cent of physicians to get on board. Do we really have the patience to wait another decade for the rest to follow?

END_OF_DOCUMENT_TOKEN_TO_BE_REPLACED

Will new health care technology bring a utopia or dystopia?

It’s easy to get carried away with the continual promise of better health care through technology. From the IBM Watson super computer to vending machines that dispense pharmaceuticals, we are likely on the cusp of a new wave of technology that will vastly change the way we deliver health care. Whether that is for better or worse is up for debate.

The public largely buys into the dream of transformation through technology. Even with all the questions raised about problems with electronic health records, for example, surveys still show substantial public support. Are we even aware of what the trade-offs are?

Richard Alvarez, President and CEO of Canada Health Infoway, told an audience this morning that the next big thing will be personal health monitors, easily accessible devices that can be picked up at department stores like Walmart.

Speaking at Longwood’s Breakfast with the Chiefs alongside Dr. Jennifer Zelmer, vice-president of clinical adoption and innovation at Canada Health Infoway, the two argued that technology can be a case of the good, the bad and the ugly. Not surprisingly given the speakers, the presentation got specific on the good and much more vague on the bad and the ugly.

Canada Health Infoway is an independent not-for-profit corporation created by Canada’s First Ministers in 2001, and funded by the Government of Canada. CHI has a mandate to work with governments, health care stakeholders and the technology industry to “improve access to health information for better care.”

After enthusing about personal health monitors, Alvarez pondered who would pay for these items, harkening back to a quote they began the session with from futurist William Gibson – “the future is already here, it’s just not very evenly distributed.” What role does government play in levelling that playing field? 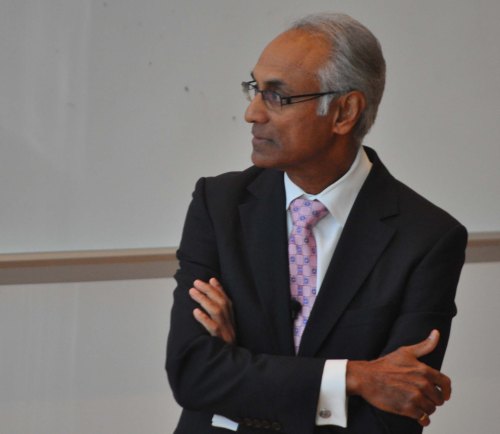 The speakers highlighted the ability of technology to make health care more accessible to remote communities, especially ones that face difficulties recruiting specialists. Zelmer specifically made the claim that Telehealth saves Canadian patients from driving 47 million kilometres at an estimated cost of $55 million. The opportunities are certainly much broader. Alvarez said with digital scanning it was possible for pathologists to work out of a single center in Canada. It was interesting that none of the audience members picked up on the implications of this – if it could all be done out of a single center, what’s to say that this center even had to be in Canada? That should be enough to make any pathologist nervous.

END_OF_DOCUMENT_TOKEN_TO_BE_REPLACED

It’s possible your health records are being used at this moment without your consent.

Health records are a valuable source of information for health research, population health monitoring, quality improvement and as evidence to inform management of our health system.

Ontario’s Information and Privacy Commissioner notes, in a new report released March 2nd, that such information is often used and disclosed to researchers in a form in which patients are identifiable. This is because the original health provider lacks the resources or capacity to “de-identify” the records before making it available, especially when the documents are paper-based. Even when data from electronic health records (EHRs) are de-identified, some researchers have found it is sometimes possible to re-identify individuals from the anonymous data.