McGuinty receives postcards on the floor of the legislature 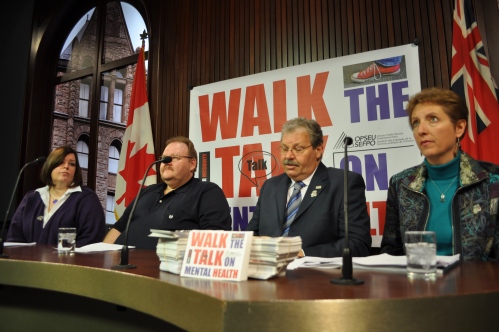 Dalton McGuinty personally received more than 600 postcards in the legislature Tuesday signed by OPSEU members asking him to “walk the talk on mental health.” The stack of cards was walked across the legislature floor from the desk of NDP Leader Andrea Horwath.

NDP Health Critic France Gelinas expressed her disappointment in the government’s lack of response to the recommendations of the all-party select committee on mental health. Gelinas had been a part of the committee, which issued its report last August.

“It sounds good to say every door is the right door,” said Al Donaldson, Chair of OPSEU’s Mental Health Division. “In the past decade that door has increasingly been our justice and corrections system. It has also been homeless shelters and the street.”

Deborah Gordon, Chair of OPSEU’s Child Treatment Centre, told the media conference “we now have a generation of children and youth who have not had timely access to treatment – in other words four out of 10 doors have been close for them.”

Gordon said a 14-bed residential home for girls is closing in Sarnia is closing at the end of the month, and other residential facilities are just hanging on.

OPSEU is asking that the government place a moratorium on any further cuts to mental health and restore funding to the Child Treatment Sector.

Health Minister Deb Matthews has promised a 10-year plan for mental health will be introduced later this spring.

OPSEU has received more than 1,000 “walk the talk” postcards from members this week and will continue forwarding them on to the Premier’s office.

This entry was posted in Mental Health. Bookmark the permalink.