Tainted blood survivors come out in Hamilton, London and Windsor

Kat Lanteigne and Dmitr Chepovetsk in a scene from Tainted.

Tainted has been on the road for three days now, encountering enthusiastic, emotional and well-informed audiences in Hamilton, London and Windsor. Next week there will be six more performances in Toronto, Kingston, Ottawa and Thunder Bay. Two special performances will take place in a committee room at Queen’s Park and in the Center block of the Canadian Parliament.

Tainted tells the story of the fictional Steele family, which playwright Kat Lanteigne imagines to be living in a modest working-class house near Hamilton. The three sons in the story are hemophiliacs; the play opening with 12-year old Leo at summer camp getting instructed how to self-infuse his Factor 8 from his older brother while rehearsing a speech that will profess his love for the camp’s 22-year old lifeguard.

For Leo, he didn’t see his love coming, and neither did the family see the tsunami that was about the overtake them as that life-sustaining Factor 8 turns out to be contaminated with Hepatitis C and HIV.

The roller coaster of a play charms us in the early going as we get to know the Steeles – then ramps up as the inevitable tragedy unfolds.

At every show there have been survivors in attendance from Canada’s biggest public health disaster. About 30,000 Canadians were infected by tainted blood products in the 1980s and early 1990s. Some shared their story on stage during the after-play Q&A sessions, others came up to us afterwards, describing how accurate Lanteigne’s play is and how they experienced similar feelings of isolation, stigma, anger, and in some cases, forgiveness. Last night in Windsor the featured guest spoke about the parallels to his own family, losing two of his brothers after they had gotten sick from tainted Factor.

In London one of the RCMP officers who was part of the five-year investigation into the role of the Canadian Red Cross in the tragedy came up to us afterwards to say hello. In Hamilton one of the lawyers attached to the Krever Inquiry spoke on stage.

This is a very special play and audience members have been reluctant to leave the theatre, asking many questions in the 20-minute session afterwards and staying longer to talk to us individually.

This is not a dry reading – the cast repeatedly praised for bringing the play to life from their stationary positions on stage. Veteran stage actress Maria Vacratsis is riveting as the mother battling to come to terms with what is happening to her family. Neil Foster is very believable as the father initially in denial, and later helpless in his efforts to defend his family. Dmitr Chepovetsk carries many of the broader details of the tragedy as the angry lawyer son preparing for the Krever Inquiry while descending into illness himself.

Amid hospital cuts and stories about long term patients being taken off of home care, the public might be forgiven for overlooking the story about what’s happening to their blood system.

We wondered if we were going to see much of an audience on Wednesday night after the storming of Parliament stunned Canadians. It turned out to be our best attended show on this first leg of the tour.

If you would still like to see this play, there are still a few tickets left for the remainder of the tour. We are particularly looking forward to returning to Thunder Bay, where the contemporary story began for us. In 2012 we were informed Canadian Blood Services was closing down the last dedicated plasma collection center in the country as imports of American plasma were on the rise. Canada’s tainted blood scandal began as the result of infected blood product being exported from the United States to countries around the world, including ours. The U.S. still maintains a paid system of donation where it is not unusual to see collection sites setting up in neighbourhoods that have an at-risk population.

We’re also doing this play to support the passage of Ontario’s Bill 21 which will prohibit paid plasma collection by the for-profit Canadian Plasma Resources (CPR). CPR had plans to open three Ontario sites, including one next to a homeless shelter and another in Hamilton across from a methadone clinic. Given our blood system is national in scope, we need other provinces to follow Ontario’s lead and for Health Canada to do its job in protecting Canadians rather than the profits of pharmaceutical companies.

To check play times and locations, please go to http://moyotheatre.com. To reserve your seats, e-mail contact@moyotheatre.com and let them know the performance you want to attend and how many tickets you would like. 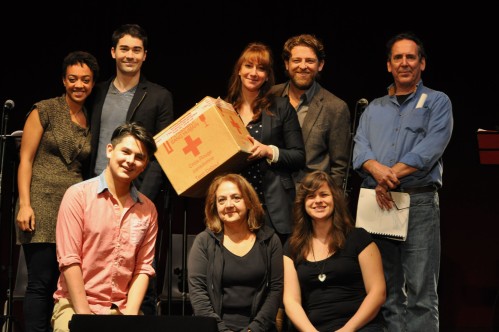 Cast of Tainted in London Ontario.

This entry was posted in Uncategorized and tagged Kat Lanteigne, Maria Vacratsis, Tainted. Bookmark the permalink.