Tainted blood survivors come out in Hamilton, London and Windsor 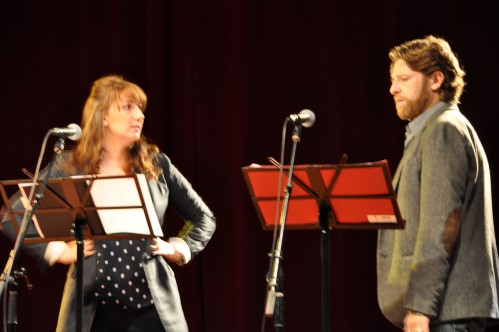 Kat Lanteigne and Dmitr Chepovetsk in a scene from Tainted.

Tainted has been on the road for three days now, encountering enthusiastic, emotional and well-informed audiences in Hamilton, London and Windsor. Next week there will be six more performances in Toronto, Kingston, Ottawa and Thunder Bay. Two special performances will take place in a committee room at Queen’s Park and in the Center block of the Canadian Parliament.

Tainted tells the story of the fictional Steele family, which playwright Kat Lanteigne imagines to be living in a modest working-class house near Hamilton. The three sons in the story are hemophiliacs; the play opening with 12-year old Leo at summer camp getting instructed how to self-infuse his Factor 8 from his older brother while rehearsing a speech that will profess his love for the camp’s 22-year old lifeguard.

For Leo, he didn’t see his love coming, and neither did the family see the tsunami that was about the overtake them as that life-sustaining Factor 8 turns out to be contaminated with Hepatitis C and HIV.

The roller coaster of a play charms us in the early going as we get to know the Steeles – then ramps up as the inevitable tragedy unfolds.