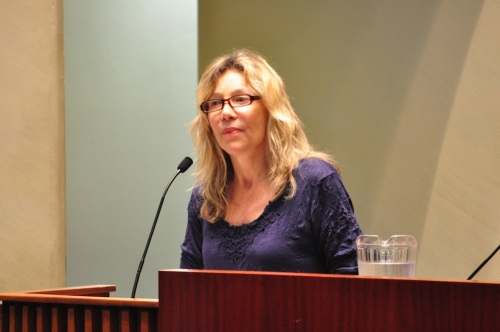 The author (The Trouble with Billionaires w/Neil Brooks) and journalist compared the recent Senate scandal to the U.S. Watergate scandal that led to the impeachment of President Nixon. While in Canada we may not have had a burglary, we did have the involvement of the highest office in the land in “an attempt to stop an investigation that was an embarrassment to government,” she said.

On hand for the presentation of the Alexander Gorlick Humanitarian Award to former Parliamentary Watchdog Kevin Page, McQuaig criticized the Harper government for shuffling off the Senate scandal investigation to ethics commissioner Mary Dawson, who is now going to conduct her investigation in secret.

McQuaig said she particularly liked Page because he publicly raised questions of accountability around austerity programs, which had an enormous impact on Canadians.

“He exemplifies the best of the public service and the best of Canadians,” she said of the now unemployed budget officer.

McQuaig says the best way to understand that a better more equitable society is possible is by simply looking to the past.

She asked who in the room had been borne since 1980?