Matthews bows out of leadership race, focus instead on health care “transitions”

Health Minister Deb Matthews says she is not seeking the Ontario Liberal leadership.

Matthews made the formal announcement at the Ontario Hospital Association HealthAchieve this morning, ending weeks of speculation.

Noting how rare it was for a health minister to be addressing her fourth OHA HealthAchieve, Matthews said she wanted to remain on as Health Minister.

Many believed that the entrance of Kathleen Wynne into the leadership contest meant that Deb Matthews would stay out.

She told the half-filled hall that the next step in “Matthews hierarchy of health care needs” is to work on transitions of care so that nobody falls between the cracks.

END_OF_DOCUMENT_TOKEN_TO_BE_REPLACED

OHA speakers say transform health before it gets cut 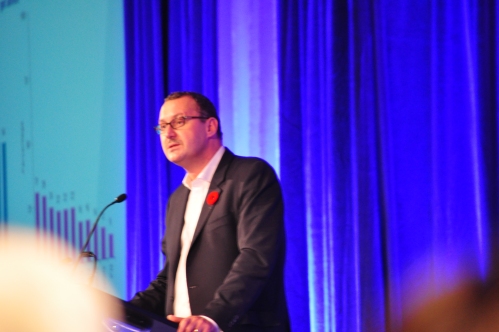 Don Berwick, former Administrator for U.S. Medicare and Medicaid Services, told the OHA conference the U.S. presently spends 17.6 per cent of its economy (GDP) on health care and is headed for 24 per cent, or almost one dollar out of every four spent south of the border.

In a later session in the afternoon, the UK’s Mark Britnell, Chairman and Partner of KPMG’s Global Practice, spoke about advanced economies being “increasingly burdened” by rising health care costs, a situation “exacerbated by the fiscal crisis.”

Britnell called economist and banker Don Drummond’s report on how to get Ontario’s house in order one of the best he’s read, even though many of Drummond’s projections have already proven to be wrong.

Neither Berwick or Britnell ever mentioned that for three consecutive years now Canada’s health care spending has dropped not only as a share of GDP, but also as a percentage of provincial spending. Britnell still shows charts claiming that Canada’s health care costs are going to rise by a staggering 2 per cent of GDP.