It’s a sign of our times when a simple labour agreement can be framed as a political triumph.

The latest is news the Ontario Medical Association reached a deal with the provincial government this week on behalf of 25,000 doctors.

Here’s the shocker: there was some give and take. This wasn’t supposed to be possible in this new austerity landscape.

Don’t we all feel better now?

END_OF_DOCUMENT_TOKEN_TO_BE_REPLACED 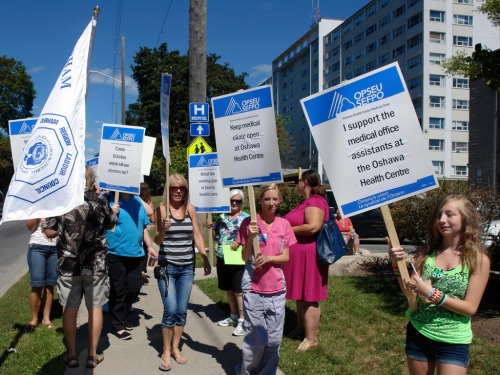 END_OF_DOCUMENT_TOKEN_TO_BE_REPLACED

Ontario’s doctors are fighting back after the government unilaterally cut $340 million in fees last month.

The Ontario Medical Association is applying to the Ontario Supreme Court of Justice for a review of the government’s negotiations tactics and the imposition of fee cuts.

The doctors are arguing the landmark BC case in which the Supreme Court of Canada recognized the right to collective bargaining should be extended to the OMA, which has negotiated the fee schedule with government since the beginning of Medicare.

END_OF_DOCUMENT_TOKEN_TO_BE_REPLACED

Bluster turns to action as Ontario rolls back doctor’s fees

After a few weeks of bluster, the Ontario government has walked away from bargaining with the province’s doctors and imposed a retroactive fee schedule that rolls back fees affecting 4,500 different OHIP services.

That includes a four-year 11 per cent rollback on fees paid for 250 diagnostic radiology tests that the government claims are justified by improved technological efficiency.

Fees paid for eye injections for retinal disease will be more than halved over four years, from $189 to $90.